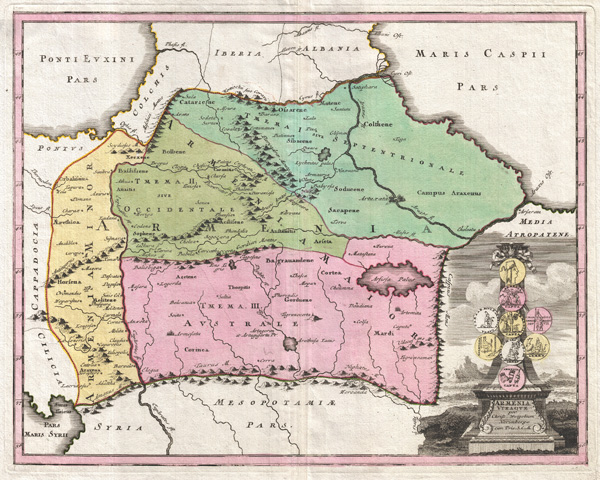 An uncommon 1720 map of the Caucuses by Christopher Weigel. This most unusual aspect of this map is its focus on the lands between the Black Sea and the Caspian, commonly known as the Caucuses. In antiquity most of this region was part of the Armenian Empire or Greater Armenia, a vast area of land stretching from Cappadocia and the Mediterranean to the Caspian and as far south as Persia. Later the Empire of Armenia was incorporated into the Roman Empire, the Byzantine Empire, and Persia. Today this region is divided between western Turkey, Georgia, Armenia and Azerbaijan. This map depicts Armenia at its greatest extant during the Roman Period. A title cartouche in the lower right quadrant includes 9 Roman coins on a decorative column. Published by Christopher Weigel for the 1720 issue of the Senca Historiarum Orientalis.

Very good. Original centerfold. A couple margin reparis on verso.
Looking for a high-resolution scan of this?