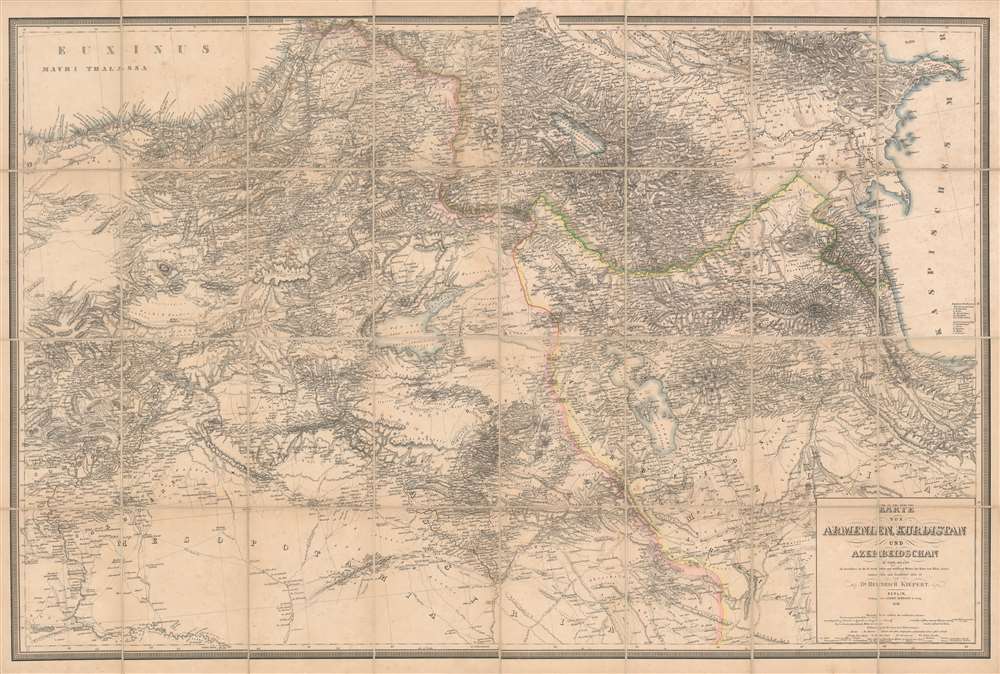 The Most Authoritative Map of Armenia, Kurdistan and Azerbaijan of the 19th Century
$1,850.00

A seminal map for the region. This is a rare 1858 map of Armenia, Kurdistan and Azerbaijan produced by Heinrich Kiepert, the day's leading authority on the geography of Anatolia and the Caucasus. This map is significant and for 50 years, was the definitive map of the region, used for treaty negotiation, military activity, and administration. Kiepert travelled the region many times - constantly sketching maps - and produced several major maps of the Ottoman world, including this one. His own observations were supplemented by his diligent scholarship, resulting in a deep understanding of explorers' history in the same are. Throughout this map are noted, and dated, the tracks of earlier travelers. The result is the finest map of the region available for most of the second half of the 19h century. The densely-hachured topography on the map testifies to the monumental difficulty of survey in the region, and the greatness of Kiepert's achievement in completing the map.

The large and meticulously detailed lithograph map covers the region between the Black Sea and the Caspian, and extending as far south as Northern Syria, embracing from Tbilisi, Georgia to Kirkuk, Iraq. The map is centered on the Eastern Anatolian Plateau and Armenian Highlands, featuring the great inland seas of Sevan, Van and Urmia. The map's major political borders - the Russian, Ottoman and Persian spheres of influence - are outlined in hand color. Kiepert made great effort to provide every town and village with the correct transliteration of their names as pronounced the locals. In quality and detail this map far outstrips the one of the same area Kiepert produced for Ritter’s Atlas von Asien: it is larger scale and includes countless corrections and improvements.

The Map of Record

So authoritative was this map that it became the standard for any serious effort to understand the region. Not only was it relied upon by travelers, archaeologists and administrators, but also it was the map used to establish new imperial borders following the 1877-78 Russo-Turkish War. (A copy with the relevant manuscript notations is preserved in the British National Archives.)

The cartography here is the work of Heinrich Kiepert and the map was published in Berlin, Germany by Simon Schropp. This map is a separate issue, and rare. We find only seven examples in OCLC, and only two price records in dealers’ catalogues. We have identified no other examples on the market.

Heinrich Kiepert (July 31, 1818 - April 21, 1899) was a German cartographer and historian active in the mid to late 19th century. Kiepert was born into generous circumstances that allowed him to develop his childhood interest in geography and history into a serious profession. The Berlin-born Kiepert traveled widely in his youth, and was encouraged in his studies by the historian Leopold von Ranke, a family friend. He was a student of classical antiquity under August Meineke and worked with Cal Ritter. He studied history, philology, and geography at the Humboldt University of Berlin - he would eventually teach geography there, and would remain there until his death. Disappointed with the poor quality of maps in historical school books, Kiepert set out to correct the problem. His first major work, the Atlas von Hellas und den hellenischen Kolonien, was published with Karl Ritter in 1840. The work immediately won accolades from the academic community. A number of similar publications followed, including the 1848 Historisch-geographischer Atlas der alten Welt, the 1854 Atlas Antiquus, and the 1894 Formae Orbis Antiqui. He traveled to Asia Minor four times between 1841 and 1848, and made two maps of the region. Thanks in large part to these four sojourns into the region, Kiepert became the recognized expert on Ottoman geography. Kiepert acquired a fascination with the historical geography of the classical worked while a student at the University of Berlin. This fascination likely led him to developing a major interest in the Ottoman Empire. ledThis, in turn, led his travels in the region, his data collection while there, and the creation of his superb maps of the Ottoman Empire. From 1845 until 1852, Kiepert served as the head of the Geographisches Institut in Weimar. In 1854 he took a position as professor of Geography at the University of Berlin and for nearly 50 years was considered the go-to man with regard to the cartography of classical and biblical antiquity. Kipert formed a long-lasting professional association with Dietrich Reimer, a publisher in Berlin. Kiepert's maps are known for b being clear, easy to read, and as accurate as possible for the time in which they were produced. In addition to his landmark work in mapping the Ottoman Empire, Kiepert also published the first detailed ethnic maps f Austria-Hungary, the Balkan Peninsula, and Germany. Kiepert died in Berlin on April 21 of 1899. Learn More...


Simon Schropp (fl. c. 1742 - present) was a German cartographer and bookseller active in Berlin during the 18th and 19th centuries. In April of 1742 Schropp received permission from the Prussian King Frederick II to make and sell maps in Berlin. Frederick was keenly aware of the lack of accurate cartographic knowledge regarding his kingdom and promoted both public and private cartographic efforts accordingly. By the late 18th century Schropp had become Berlin's most prominent publisher of maps and atlases. Schropp's royal mandate and allowed him access to some of Prussia's leading cartographic figures, including Daniel Sotzmann, the Royal Geographer, among other. His maps thus contained the most updated cartographic knowledge and were considered to be of the highest caliber. Despite wars, French occupation of Berlin, Schropp thrived. Schropp and Company remains alive and well today. Their original location Konigsstrasse and Heilige Geiststrasse was destroyed in a bomb during the final days of World War II, but their new location on Hardenbergstr, 9a, is a thriving business catering to the travel and tourism literature market. Learn More...

Very good condition. Some very light spots of toning. Dissected and mounted on linen as issued.