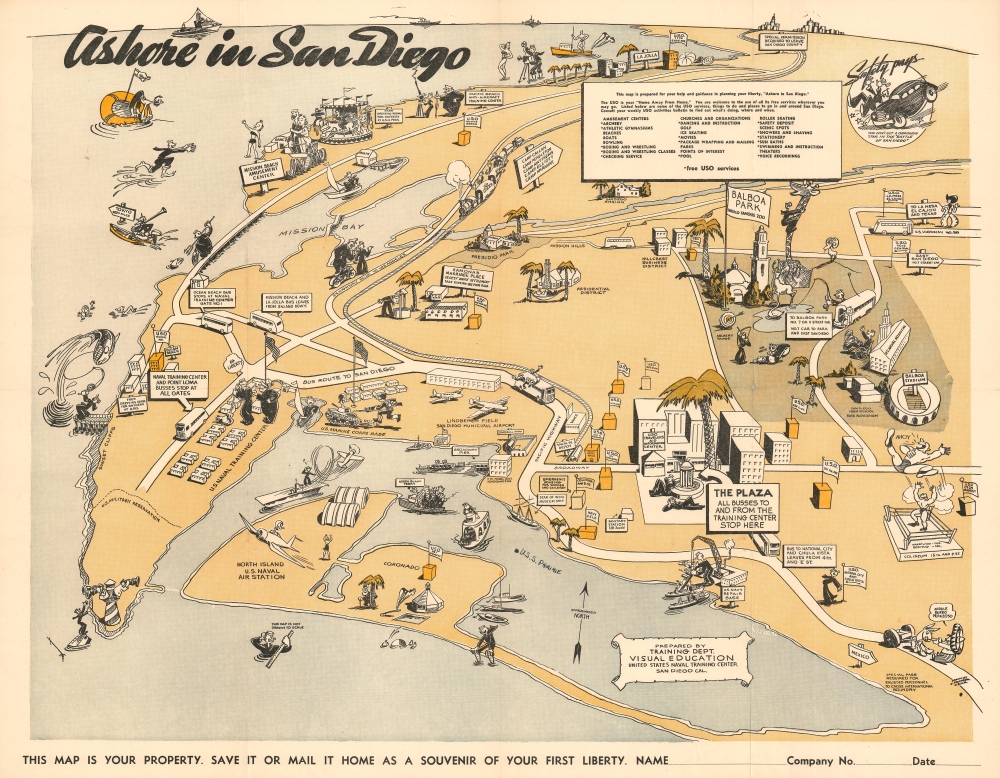 This is a charming World War II era 1943 pictorial map of San Diego issued by Edward Pranger for the U.S. Navy Training Center. The map centers on Lindbergh Field (San Diego Municipal Airport) and focuses on attractions, military installations and USO centers around San Diego. Coverage extends north as far as La Jolla (although Los Angeles appears on the horizon), south roughly to the Mexican border, and from the Pacific to Balboa Park.

Even before the outbreak of World War II, San Diego was considered a 'Navy Town' with multiple navy and coast guard facilities. When war broke out in 1939, San Diego was selected as the secondary headquarters of the Pacific Fleet (after Honolulu). As a major naval base, San Diego was a favorite port of navymen returning to the United States after long Pacific voyages. Its excellent weather and wealth of diversions are displayed prominently on this map - ranging from fishing off the piers, to Balboa Stadium, to the Zoo, to the roller coaster and carousel at the Plunge in Mission Beach. It was also the home of the Naval Training Center, the publisher of this map. Located at the north end of San Diego Bay, the NTC was founded in 1919 on donated land. By the opening of WWII, the San Diego Center was training more than 20,000 recruits at a time, earning it the nickname, 'Cradle of the Navy.'

This map was drawn by Edward Pranger and published by the San Diego United States Naval Training Center's 'Visual Education' department. We are aware at least 2 editions. The present edition, and another where the title is printed in the lower left quadrant.

Edward Herman Pranger (June 28, 1912 - February 7, 2012), known as Ed, was an American artist, illustrator, and cartoonist active in the middle part of the 20th century. Pranger was born in Hillsboro, Oregon. As a young man he proved a talented artist, selling his cartoons and other drawing to the local newspaper for 50 cent as a pop. His family moved to Yakima, Washington to work at the canneries when he was a young man. Ed himself took work as a sign painter, illustrating truck, buildings, and billboards. He also took a correspondence course with the Famous Artists Schools - his only art training. He purchased the sign shop with friend, Carl Fenner, when the original owner retired. After the outbreak of WWII, Ed joined the Navy in 1942, spending 4 years at the training center in San Diego where he was employed by the Recruit Training Command as an artist and cartoonist. There he published artwork in The Hoist, a U.S. Navy internal newspaper published from 1923 to 1994, and Wing Tips. After the war, Ed returned to Yakima WA, and re-opened the Fenner and Pranger sign shop, branching out into drawing advertising for early television. In 1956, he moved to Los Gatos, California, where he opened a commercial art and silk screen business based in San Jose. He and his wife, Mary Talbot Helliesen, moved back to Washington in 1980, settling in Anacortes. During his long retirement, Pranger painted more than 250 acrylics, many of which were sold at the local Marine Supply Hardware. He work was once described as 'Grandma Moses meets the Far Side'. Pranger died in Anacortes, Washington at the impressive old age of 99 1/2. Learn More...