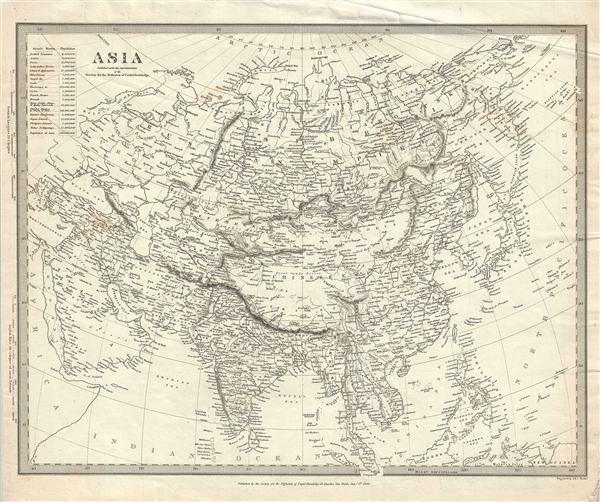 Map of Asia at a time when the continent was coming under increasingly imperial European sway.

This is a nice example of the Society for the Diffusion of Useful Knowledge or S.D.U.K.’s 1840 first edition map of Asia. It covers the entire continent from the Arctic Ocean to the Indian Ocean and from the Mediterranean Sea to the North Pacific Ocean. Includes Turkey, Arabia, Persia, the Indian subcontinent, Russia, the Chinese Empire, Japan and parts of the East Indies.

This map was part of A Series of Maps, Modern and Ancient, issued by subscription by the S.D.U.K. Each folder in the series would contain a set of two maps bound together. The map accompanying this folder, not included here, was of Australia. Original folder included the names of committee members of the ‘Society’, a list of maps already published, the folder number, which is this case was LXXXI, the contents and the printer and publication details. The folder at the time was priced at 1 shilling or 1 shilling 6 pence for maps colored. This map was engraved and printed by J. and C. Walker. Printed by William Clowes and Sons and published by the Society for the Diffusion of Useful Knowledge in their Feb 17, 1840 subscriber’s edition folder.