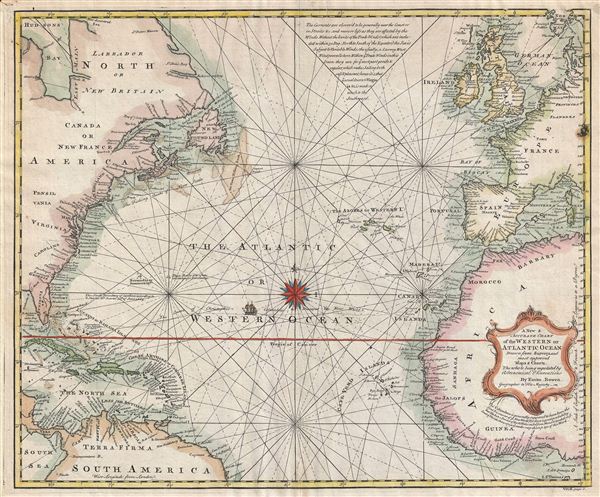 A fine map of the Atlantic Ocean drawn by emmanuel Bowen in 1744. The map covers from the Arctic Ocean to South America and Africa's Slave Coast and from Cuba and Florida eastwards as far as England and Sardinia. Rhumb lines throughout allude to this map originals as a nautical chart. As such it offers little inland detail but copious notations of important ports and harbors along the coast, as well as, at top center, comments regarding the currents, trade winds, and other weather patterns. A track, including a miniature sailing ship, represents the most likely course of Columbus as he sailed to discover the New World.

And, yet, Bowen calls just this into question with a curious comment set just below the title cartouche:

Tho' Columbus is generally supposed to have been the first Discoverer of y New World, Yet there is great probability that Madoc a Prince of North Wales sailed from thence and landed on y Coast of Florida Anno 1170.

Madoc, also known as Madog ab Owain Gwynedd was, according to folklore, a Welsh prince who sailed to America in 1170, roughly three hundred years before the voyages of Columbus. The legend though quite ancient, became popular during the Elizabethan era, when english propagandists seized on the story to assert prior discovery, and hence legal possession, of North America. A later variant on the legend claims that Madoc's and his company intermarried with Native Americans, and that their Welsh-speaking descendants still lived somewhere on the American frontier as 'Welsh Indians.'

The map moreover advocates for english control of much of northern Florida based upon the original Carolina Charter established in 1663 by Charles the II. Further north the map incudes the Grand Banks – a Cod Fishing heaven hotly disputed by various colonial powers well into the early 19th century. Various additional shoals, reefs, and other undersea dangers are noted throughout the Caribbean, here identified as the 'North Sea.'

This map was drawn as plate no. 3 in volume II of the 1744 edition of Bowen's Complete System of Geography.

Bowen, E., A complete system of geography. Being a description of all the countries, islands, cities, chief towns, harbours, lakes, and rivers, mountains, mines, &c. of the known world …, 1744 edition.

Very good. Discoloration near France. Minor verso repairs where originally tipped into frame.
Looking for a high-resolution scan of this?