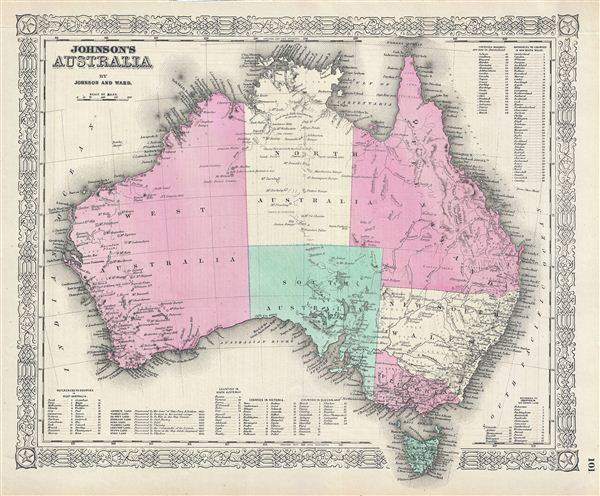 This is Johnson and Ward's 1864 map of Australia. The map covers the entire continent including Tasmania or Van Diemen's Land. Johnson's mappings of Australia, updated annually through the 1860s, offer a comprehensive overview of the exploration of the continent's interior. This example depicts the continent with good detail along the coast and a largely unexplored interior. Shows the Torrens Basin, the Stony Desert, Traveler's Valley, and the extant of Sturt's inland exploration. Tables in the corners show references to various counties in each province. A smaller table in the lower left provides a time line for the exploration of the continent, noting the dates associated with important navigators including Tasman, Arnhem, Hartog, edel, Flinders, and others. Various towns, cities, rivers and several other topographical features are noted with relief shown by hachure. It features the fretwork style border common to Johnson's atlas work from 1863 to 1869. Steel plate engraving prepared by A. J. Johnson for publication as plate no. 98 in the 1864 edition of his New Illustrated Atlas.  This is the first edition of the Johnson's Atlas to bear the Johnson & Ward imprint and the only edition to identify the firm as the 'Successors to Johnson and Browning (Successors to J. H. Colton and Company).'