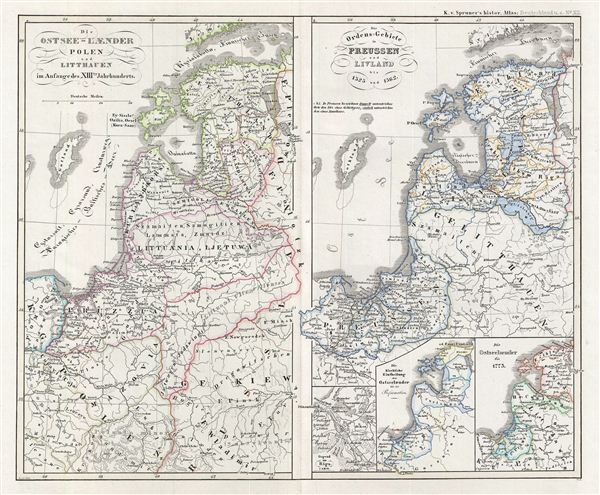 This is Karl von Spruner's 1854 map of Poland and Lithuania in the beginning of the 13th century and of Prussia and Livonia between 1525 and 1562. essentially two maps on a single sheet. The leftmost map covers from the Gulf of Finland and estonia to the northern part of modern day Ukraine, including parts of Poland. The map right hand covers from the Gulf of Finland and estonia to Lithuania and Prussia. Three smaller inset maps at the bottom of the right-hand map on the right detail Riga, the ecclesiastical division of the Baltic region, and the Baltic countries through 1773. During the early 13th century, most of modern day estonia, Latvia and parts of Lithuania were conquered by two German religious orders. In 1236 the Mindaugas defeated the Livonians and were crowned Kings of Lithuania, thus establishing the short-lived Kingdom of Lithuania. The whole is rendered in finely engraved detail exhibiting throughout the fine craftsmanship of the Perthes firm. Prepared by Karl Spruner for publication as plate D XII in the second edition of Justus Perthes' 1854 Historich-Geographischer, Hand-Atlas zur Geschichte der Staaten europa's vom Anfang des Mittelalters bis auf die Neueste Zeit.