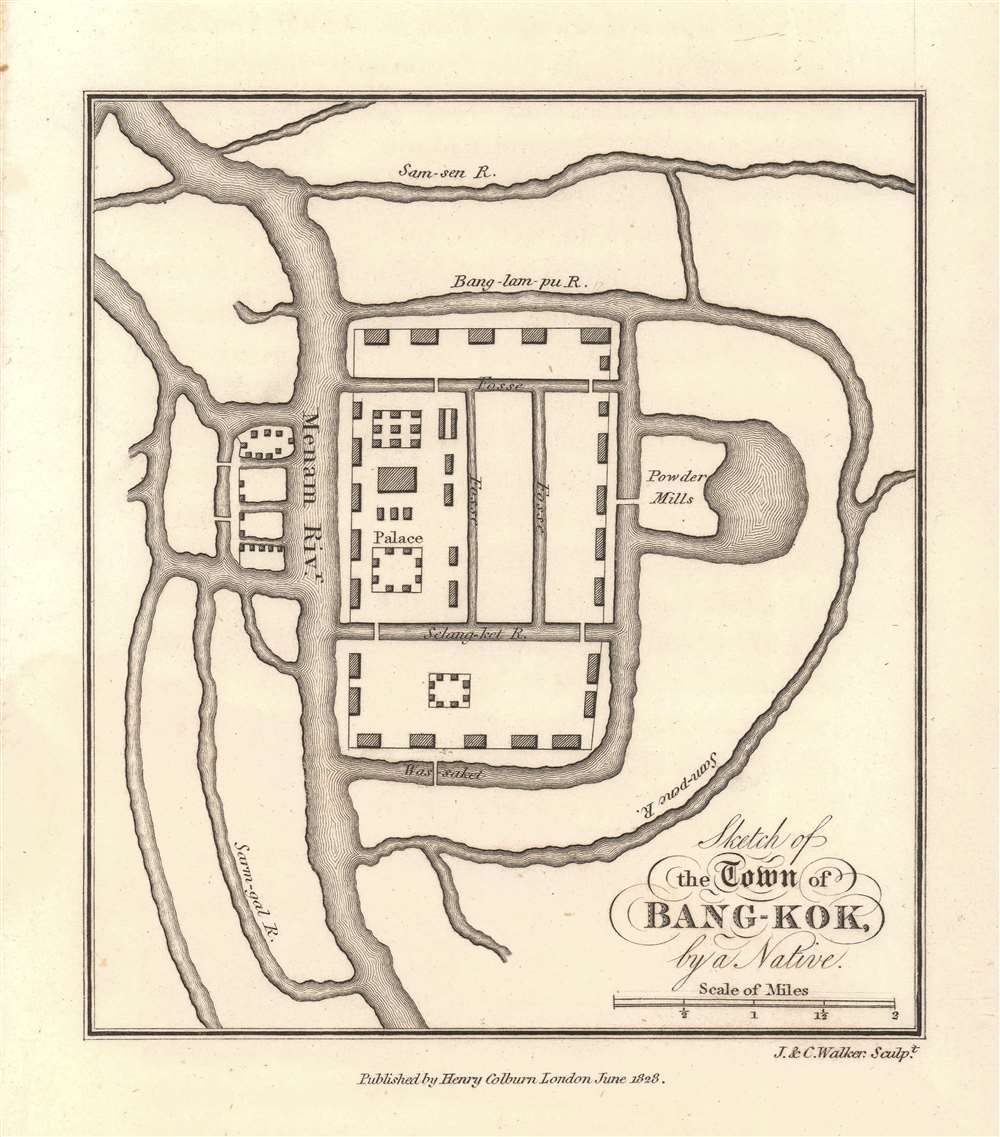 This is the earliest known map of Bangkok, Thailand, issued in 1828 shortly following John Crawfurd's diplomatic mission to the royal court of Siam. The map itself purports to be 'by a native', and was likely drawn for Crawfurd in 1822, when he visited. The map is oriented to the north, with the Royal Palace and temple complex at center. The Chao Phraya River is here identified by the archaic name, Manam. The area covered roughly corresponds to the modern-day Grand Palace and Wat Pho complex. The Powder Mills at the right of the palace are today Saranrom. Some English terminology is used, but waterway names are anglicized Thai.

When Crawfurd arrived Bangkok it was not yet an exceptionally large city, but nonetheless had been made capitol of Siam in 1782 by Rama I. The larger population center and old capital was further north at Ayutthaya. Crawfurd dedicates significant attention to the city,

Bangkok extends along the banks of the Manam, to the distance of about two miles and a half; but it is of no great breadth, probably not exceeding one mile and a half. The principal portion of the town is on the left bank of the river, where the palace is situated. The accounts which we received of it population were very vague and little to be relied on. Some of them made it amount to as much as one hundred and fifty thousand. Judging by the extent of ground on which it stands, I should not be disposed to estimate the inhabitants at more than one-third of this number.

The map view drawn by 'a native' of Bangkok in late 1822 or early 1823, but was not printed until John Crawfurd included it in the 1828 publication of his Journal of an Embassy from the Governor-General of India to the courts of Siam and Cochin-China: exhibiting a view of the actual state of those kingdoms.. It was engraved in London by J. and C. Walker and was published by Henry Colburn. The map was included in all editions of Crawfurd's work, but is rarely found separately and is scarce to the market. The OCLC sites just one separate example, located at the British Library.

Henry Colburn (1784 - August 16, 1855) was a British publisher. Colburn started off in the publishing profession in the Albemarle Street shop of William Earle, a bookseller in London. His next move was to become an assistant at a circulating library on Conduit Street called Morgan's Library, which he took over in 1816. Eventually he signed this business over to Messrs. Saunders and Otley and opened his own publishing firm. He gained initial success with the roman à clef novel Glenavron by Lady Caroline Lamb and which was published in 1816. It went through four editions and sold well. Colburn later expanded on the success of Glenavron and published a series of so-called 'Silver Fork Novels', a series of books that afforded readers the thrill of peering into the lives of rich and aristocratic families. Colburn also started several periodicals, including the New Monthly Magazine, the Literary Gazette, the earliest weekly newspaper dedicated to literature, science, and the arts. Colburn married twice. His second marriage was to Eliza Anne, who survived him. Learn More...