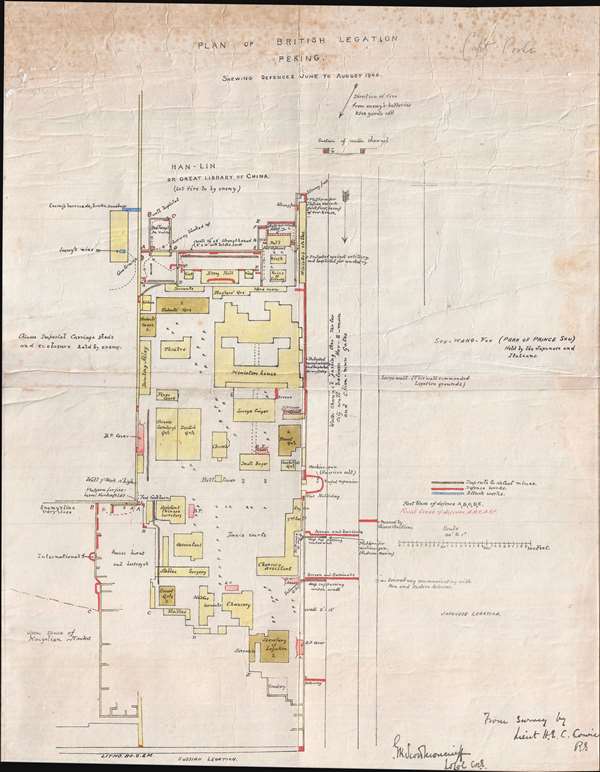 The first printing of the most authoritative and influential map of the siege of the British Legation in Peking (Beijing) during the Boxer Rebellion. Printed in Beijing!

An otherwise unobtainable rarity of the utmost historical importance produced in Beijing in the aftermath of the 1900 Boxer Rebellion (Yihetuan Movement, 義和團運動). This is the first, largest, and best official map Beijing's British Legation to illustrate the events of the Boxer Rebellion (1899 - 1901) and the siege of the Legation Quarter.

The map is the product of meticulous on-site surveys and post-siege interviews conducted by British Engineer Henry Edward Colvin Cowie. When the Boxer Rebellion laid siege to the Beijing Legation Quarter, Cowie was drafted from his civilian position with the Indian Public Works Department and sent to Beijing as part of the Bombay Sappers and Miners contingent of the China Relief Expedition. The map was printed on site and bears the Bo. S. and M. (Bombay Sapper's and Miners) imprint, suggesting it was printed with field lithography equipment carried with the Relief Expedition. This is thus the first printing of Cowie's important map and is the source of several subsequent editions which appeared in various influential books and articles on the Boxer Rebellion.

Lithograph signatures of both Lieut. H.E.C. Cowie, and his superior, Lieutenant Colonel George Kenneth Scott-Moncrieff, appear in the lower right. It is also signed in manuscript by Captain Francis Garden Poole (1870 - 1950), an important figure in the defense of the British Legation, this providing the map with an excellent provenance.

The Beijing Legation Quarter was the symbolic focal point of foreign influence in China. Following the Opium Wars (1856 - 1860) the Qing government established the Legation Quarter to house foreign dignitaries and businesses. The Beijing Legation Quarter, located just southeast of the Forbidden City, was approximately 2 mi (3.2 km) long and 1 mi (1.6 km) wide. By 1900, the Legation Quarter was practically a miniature city, as this map shows, containing the legations, foreign and Chinese businesses, churches, schools, theaters, medical facilities, and more. In all, there were 11 legations located in the quarter: Britain, France, United States, Japan, Russia, Austria-Hungary, Germany, Italy, the Netherlands, Belgium and Spain. Ethnic Chinese, most of whom were Christian converts, also owned businesses and homes scattered throughout the district. In total, in 1900, there were about 500 western and Japanese nationals residing in the quarter.

The Boxer Rebellion or Yihetuan Movement (1899 - 1901, 義和團運動) was an anti-foreign anti-imperialist uprising marked by proto-nationalism in northeastern China. The rebellion was largely a response to Christian missionary activity in China and was initially supported by the Qing Empress Dowager Cixi and her ministers who distrusted the radical and unpredictable peasant movement but sympathized with their goal of driving foreign influence out of China. In June of 1900, some 20,000 Boxers, convinced that their spiritual and martial prowess gave them immunity to foreign weapons, attacked the Chinese Christians and foreign nationals living in Beijing's Legation Quarter. Although terrible violence ensued, the Legation Quarter, centered around the defensible British Legation, was able to resist the siege. Relief came about a month and a half later in the form of the Eight-Nation Alliance China Relief Expedition, which, with an army of some 20,000, defeated the Boxers and occupied Beijing, as well as a number of other northern Chinese cities. The atrocities and looting that ensued, particularly at the hands of Russian and Japanese forces, are well documented and horrifying.

With telegraph lines cut, the defenders of the legations had no practical way to communicate with the outside world and no idea how long it would take for military aid to arrive. Instead, some 900 soldiers and about 2,000 Chinese Christians led by the British Minister Sir Claude MacDonald, set to establishing a defensive perimeter. New walls were constructed at strategic choke points and old defensive works were shored up. The British Legation, as illustrated here, being the largest and most defensible, formed the core of the Quarter's defense. American and German forces were assigned to the aging Tarter Wall, the primary line of defense, while the French, Italian, and Japanese took positions in the north-western part of the Quarter.

The Chinese Boxer army, rather than using their overwhelming numbers to push through the Legation's defense, instead focused on artillery, sniper volleys, and occasional probing charges. Recognizing the strong defense, on June 23, the Boxers attempted to burn out the Legation Quarter with a series of fires along the perimeter. The blazes soon got out of control and backfired on the Boxers, destroying many of the wooden Chinese structures surrounding the quarter, as well as the 8th Century Hanlin Yuan or National Library of China (appearing top center), a loss comparable to the burning of the Great Library of Alexandria. At the same time, the fires had little effect on the stone and masonry structures of the Legations. The ultimate result was the creation of large open buffer zones around the Legation Quarter, making it even more defensible.

The map features an owner's inscription in the upper right identifying 'Capt' Poole.' This refers to Captain Francis Garden Poole (1870 - 1950) of the East Yorkshire Regiment. Poole was a British military officer who studied at Sandhurst Military Academy and served with the Central African Rifles from 1896 - 1900. Poole's older brother, Dr. Wardworth Poole (1868 - 1902), was the chief physician at the British Legation, which doubtless influenced Poole's May 20, 1900 transfer to Beijing. His timing was unfortunate, as he arrived only 3 weeks before the legation came under siege by 20,000 Boxers. Poole, as one of the few combat veterans present, was given the responsibility for transforming the Legation's 150 civilian volunteers into an effective combat force. In this he was remarkably successful. Poole's green recruits played a significant role in the defense of the legation, earning him the only Distinguished Service Order (DSO) granted during the siege. Poole kept a detailed diary throughout which is today considered a definitive historical record of the Boxer Rebellion and the siege of the British Legation; it remains in manuscript form at the National Army Museum, London.

Census and States of the Map

There is only one other known surviving example of this map which appears pasted into scrapbook assembled by Cowie. That book is now held at the archives of the London School of Oriental and African Studies (SOAS) (Reference: GB 102 MS 381080). A copy of this map is known to have been gifted by Lt. Col. Scott-Moncrieff of the Royal Engineers to Arthur H. Smith, whose 1901 2-volume work, China in Convulsion, considered the definitive history of the Boxer Rebellion. A reduced version of this map is included in that important work.

History as it was Happening!

As a primary representation of 'the most exciting episode ever known to civilization' (New York Sun), this map is a once in a lifetime opportunity for the serious collection focused on East Asia.

Henry Edward Colvin Cowie (December 17, 1872 – 1963) was a British-Indian military officer and engineer. Cowie was born in Calcutta, the son of Henry George Cowie, an official in the Indian Finance Department. Cowie was sent to England where he studied at the Shrewsbury School and the Royal Military Academy at Woolwich, graduating in 1893 with the rank of Second Lieutenant. Cowie returned to India in 1895 where he worked as a deputy engineer at the Indian Public Works Department. When the Boxer Rebellion (1899 – 1901) laid siege to the Beijing Legation Quarter, Cowie was sent with the British contingent of the China Relief Expedition to lift the siege. There he was tasked to create an accurate map of the British Legation showing the events of the siege – which is today the most important map of that event. Cowie remained in China until 1903, where his engineering expertise helped to rebuild British infrastructure damaged during the rebellion. He returned to India after 1903 where worked with the Indian State Railways before committing to a military service from 1914 – 1920. In 1920, Cowie returned to his civilian career at the India State Railways, this time as Chief Engineer, a position he held until his retirement in 1927. Leaving India forever, Cowie settled in Stockport, Cheshire, England, where he remained until his death 35 years later. His son, Henry John Cowie, was an important Hong Kong businessman after World War II. Learn More...

Good. Backed on Chinese tissue and stabilized with Kozo tissue. Some creasing and foxiing.

School of African and Oriental Studies Archives (SOAS), GB 102 MS 381080.
Looking for a high-resolution scan of this?