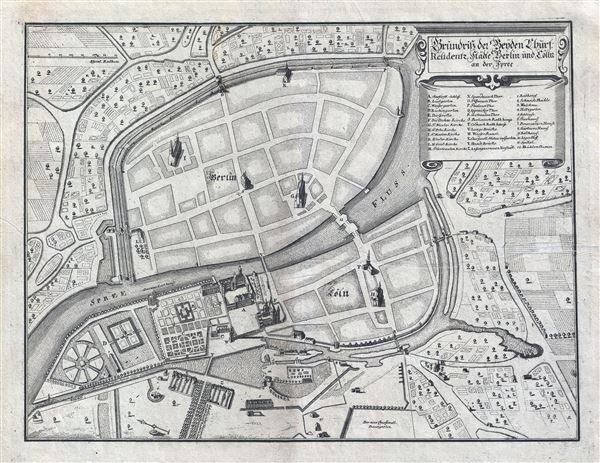 The oldest known map of Berlin.

Drawn in 1652 by Johann Gregor Memhardt, and thus known as the Mamhardt Plan, this is the earliest known map of Berlin. Menhardt prepared this plan while employed by Frederick William, the Great Elector, to restore and rebuild the royal residences in and around Berlin following the devastation of the Thirty Year War, in which much of Berlin was destroyed and nearly half of its population lost. Oriented to the east and centered on the Spree River, Memhardt's map covers mediaeval Berlin, Colln, and the Castle District. It is the only surviving document to illustrate Berlin's medieval walls. Important buildings are rendered in profile and include the royal residence, several churches, the Mühlendamm, and the 'Olde Markt.' THis map was prepared in 1652 to illustrate Merian's Topographia Electorat, Brandenburgici et Ducatus Pomeraniae.

Johann Gregor Memhardt (1607 - 1678) (or Memhard) was a German architect, landscape designer, military engineer, and politician. Memhardt emigrated from Linz to the Netherlands in 1622, where he probably learned the art of fortification. He served as a military engineer with George William, Elector of Brandenburg from 1638 onwards and in 1641 was appointed court engineer. Under his leadership the Residenzschloss was repaired and a chapel built for crown princess Louise Henriette. In the Lustgarten he built a 'Lusthaus'. From 1651 the Schloss Oranienburg and its gardens were built to Memhardt's designs, known from the plan of Berlin published in 1652. It is this plan for which, in cartographic circles, he is best known. It is the earliest printed map of Berlin. Learn More...


Matthäus Merian (September 22, 1593 - June 19, 1650), sometimes referred to as 'the Elder' to distinguish from his son, was an important Swiss engraver and cartographer active in the early to mid 17th century. Merian was born in Basel and studied engraving in the centers of Zurich, Strasbourg, Nancy and Paris. In time Merian was drawn to the publishing mecca of Frankfurt, where he met Johann Theodor de Bry, son of the famed publisher Theodor de Bry (1528 - 1598) . Merian and De Bry produced a number of important joint works and, in 1617, Merian married De Bry's daughter Maria Magdalena. In 1623 De Bry died and Merian inherited the family firm. Merian continued to publish under the De Bry's name until 1626. Around this time, Merian became a citizen of Frankfurt as such could legally work as an independent publisher. The De Bry name is therefore dropped from all of Merian's subsequent work. Of this corpus, which is substantial, Merian is best known for his finely engraved and highly detailed town plans and city views. Merian is considered one of the grand masters of the city view and a pioneer of the axonometric projection. Merian died in 1650 following several years of illness. He was succeeded in the publishing business by his two sons, Matthäus (1621 - 1687) and Caspar (1627 - 1686), who published his great works, the Topographia and Theatrum Eruopeaum, under the designation Merian Erben (Merian Heirs). Merian daughter, Anna Maria Sibylla Merian, became an important naturalist and illustrator. Today the German Travel Magazine Merian is named after the famous engraver. Learn More...