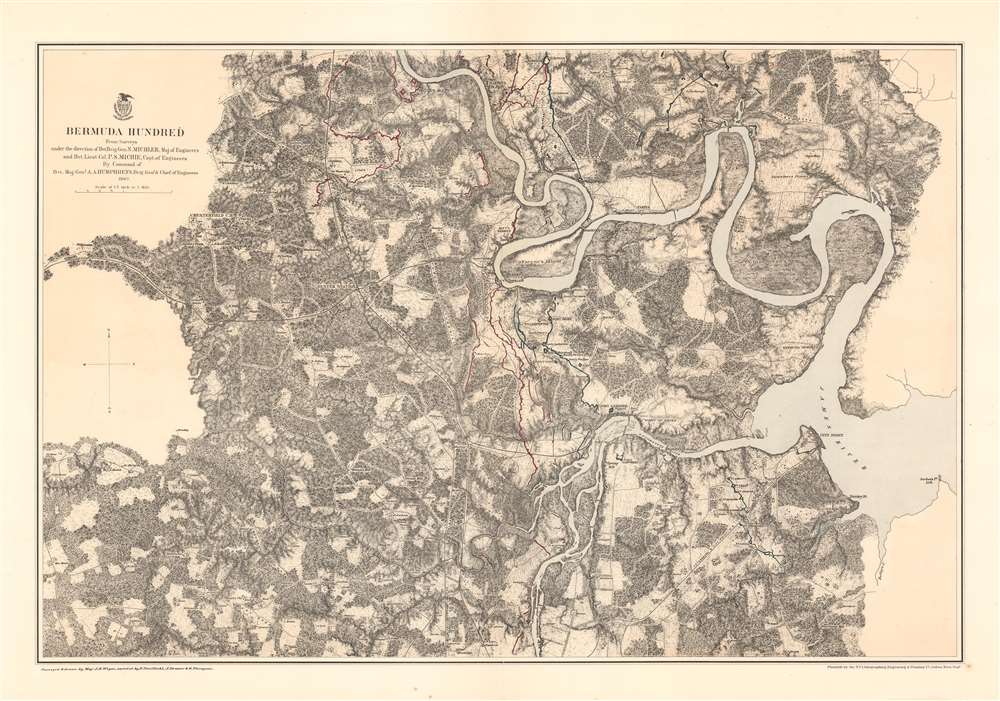 This is an 1867 John Weyss and Nathaniel Michler map of the Bermuda Hundred Campaign during the American Civil War. The map depicts the region from the Dunnson farm to the Jordan's Point Lighthouse on the James River and from Chaffin's Bluff and Drury's (Drewry's) Bluff to the J. Mason farm.

A series of battles fought in May 1864, the Bermuda Hundred Campaign was fought between the Union Army of the James led by Major General Benjamin Butler and a much smaller Confederate force under the command of General P.G.T. Beauregard. Butler and the Army of the James landed at Bermuda Hundred, a fishing village situated on a peninsula at the confluence of the Appomattox and James Rivers between Richmond and Petersburg, Virginia, on May 5, the same day that General Grant and the Army of the Potomac launched the Overland Campaign at the Battle of the Wilderness. With the ultimate aim of severing the Richmond and Petersburg Railroad, a vital rail link to the south, a series of battles ensued. Many of these battles happened at locations labeled here, including the Battle of Port Walthall Junction, the Battle of Chester Station, the Battle of Proctor's Creek (also known as the Battle of Drewry's Bluff), and the Battle of Ware Bottom Church. Although Butler commanded a superior force to that of Beauregard, the best he was able to achieve was a stalemate. Butler was one of the 'political generals' appointed because of their loyalty to Lincoln and his reelection campaign and was not a very talented commander. Even with two very talented subordinates, Butler and the Army of the James were 'bottled-up' in the vicinity of Bermuda Station and were not able to occupy a large number of Confederate forces, allowing these Confederate soldiers to be reassigned to fight General Grant's Army of the Potomac at Cold Harbor and elsewhere.

With Confederate forces noted in red and Federal (Union) forces in blue, the many actions of the Bermuda Hundred Campaign are illustrated here, although the progression of the campaign is not noted. Numerous forts, batteries, and other locations integral to the fighting are illustrated and labeled, as are myriad farms and homesteads. Roads and railroads, including the Richmond and Petersburg Railroad, the Richmond and Petersburg Turnpike, and the Petersburg and City Point Railroad, are also identified.