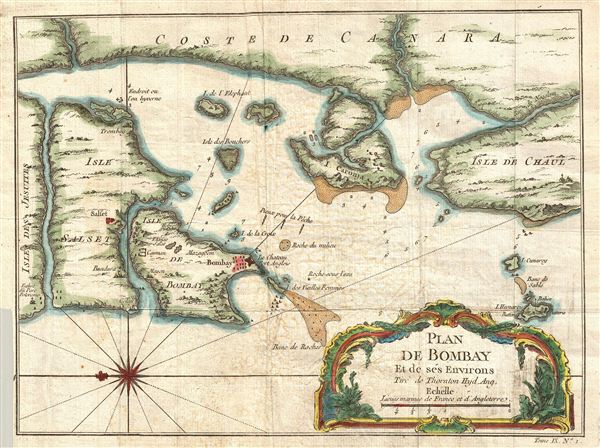 This beautifully hand colored, copper-plate engraved, 1752 map of Bombay (Mumbai), captures the town that was becoming the east India Company's base of operations in India, replacing Surat to the north in light of hostilities there. Bombay was under lease to the east India Company from the British Crown, who had acquired the island from Portugal as part of the marriage agreement between Charles II and Princess Catherine of Braganza. With easy access to the Persian Gulf - Indian Ocean trade route, Bombay quickly became a busy harbor town and important center for British commerce. Drawn by Jacques Nicolas Bellin and published as plate no. 3 in volume 9 of the 1752 French edition of Abbe Provost's L'Histoire Generale des Voyages.

Very good. Original fold lines. Blank on verso. Some water damage.
Looking for a high-resolution scan of this?