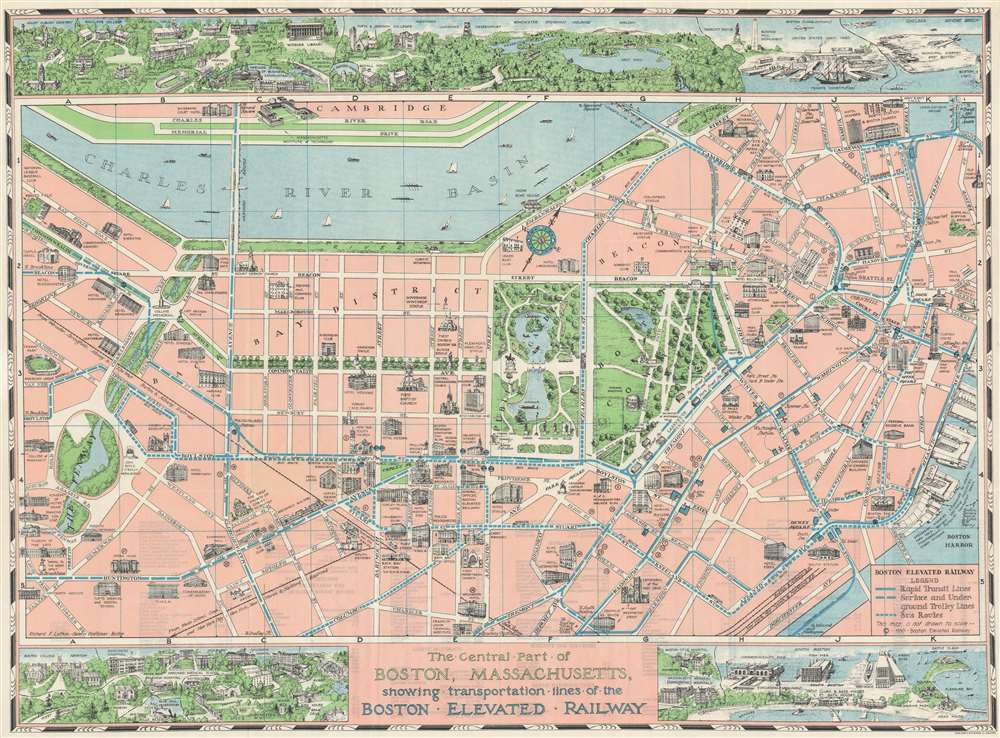 Highlights Boston's mass transit network, including the elevated railway and the subway, the first built in the United States.

This is a 1930 Richard F. Lufkin pictorial city plan or map of Boston, Massachusetts. Focused on the central part of the city, blue lines trace Boston's elevated railway ('El'), subway, bus, and trolley lines. The solid blue lines, long-dashed lines, and short-dashed lines all mark different types of rapid transit. Unfortunately, between the key in the lower-left corner and the map itself, it is unclear exactly which type of mass transit is represented. It appears that the solid line and the long-dashed line mark the subway, elevated railway, and the trolley lines interchangeably. The only truly clear annotation concerns the bus lines, which are traced by the short-dashed lines. Stations are labeled, including the Park Street Stations on Lafayette Mall, which are illustrated in profile. Boston's many landmarks are depicted in profile, including Fenway Park, Trinity Church, the State House, Massachusetts General Hospital, and the Massachusetts Institute of Technology across the Charles River in Cambridge. Boston Common and the Public Garden appear as a green island in the middle of the city. Small bird's-eye views act as the top and bottom borders. They include views of Harvard University's campus, Middlesex Fells Reservation, the U.S. Navy Yard, the municipal airport, and South Boston, with numerous buildings illustrated in profile in each place.

The Boston Elevated Railway was founded in 1894 to get traffic off of Boston's streets to ease congestion. Construction began in January 1899 and started operations on June 10, 1901. The subway, which was operated by the same company, opened in September 1897, the first subway in the United States. The 'El' was popular through the 1940s and carried 325,000 people a day in 1943. However, after World War II, public opinion began to turn against the 'El.' It was overcrowded, caused a lot of noise, and came to be viewed as an eyesore. These opinions also coincided with increased enthusiasm for underground mass transit. By the mid-1960s, city officials decided it was time for the 'El' to go and slowly began phasing it out. The last elevated train ran in Boston on June 25, 2004.