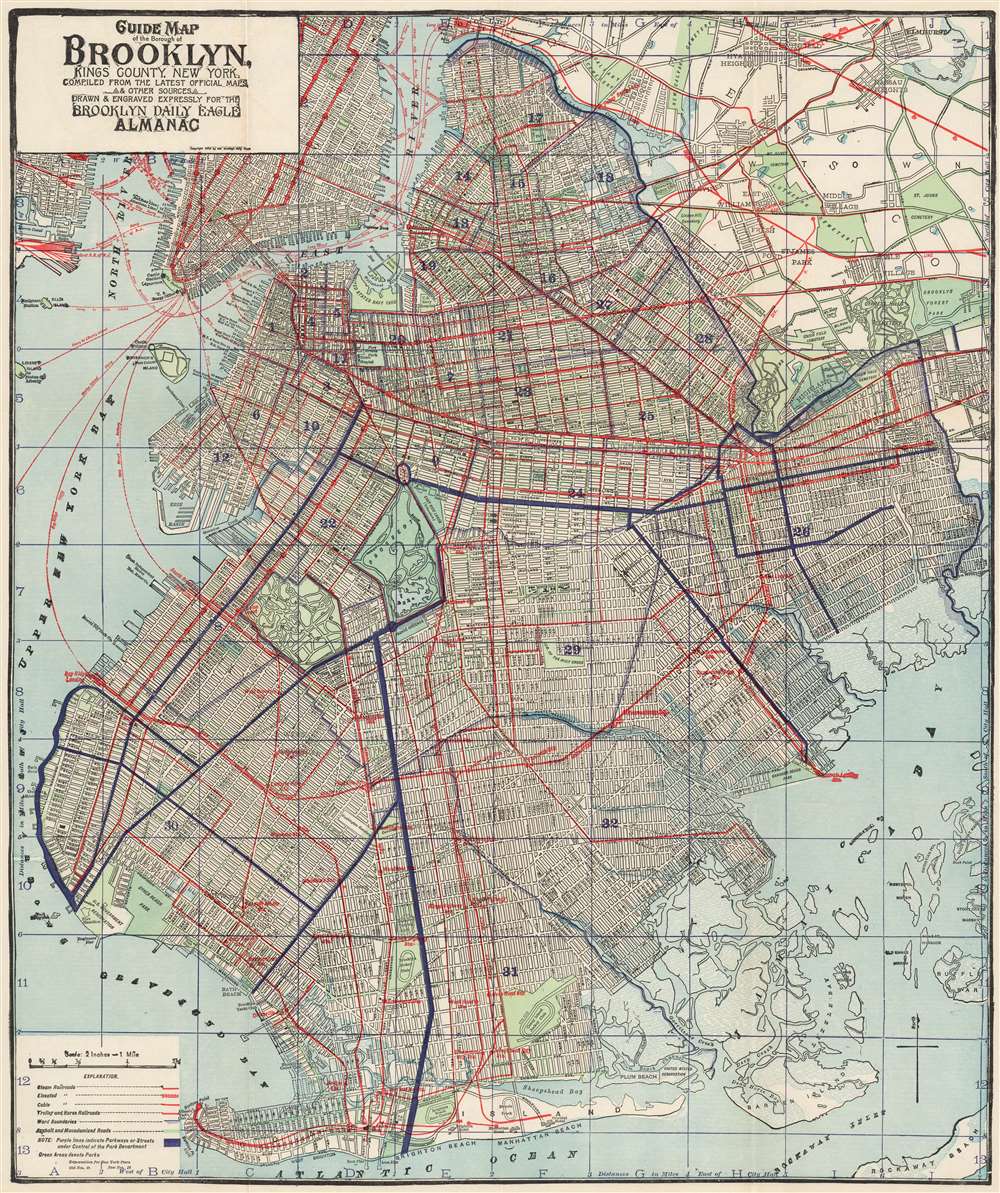 This richly detailed map of Brooklyn was, in its first 1898 issue, the first map to show Brooklyn as a borough, in the aftermath of the city's annexation by New York City. The Brooklyn Eagle continued to include the map in its almanac as late as 1912 and possibly later, adding detail to the map as time progressed.

We are aware of three separate printings of this map, of which this is the third. To its key has been added the following:

NOTE: Purple lines indicate Parkways of Streets under Control of the Park Department

Among these, Ocean Parkway is prominently marked, along with Bay Shore Parkway and Highland Boulevard. Brooklyn's equestrian history is captured here just as it dwindled: the Brooklyn Jockey Club (between Gravesend and Ocean Parkway) would close in 1910; the Coney Island Jockey Club would be shuttered in 1911. The Brighton Beach Race Course was closed for horse racing in 1908; attempts at keeping the course going with automobile races would continue until the 1920s. (The 1898 issue of the map showed only dotted lines for these features, indicating prospective works.) There are more changes to the map than colored roads and parks, however: for example, the former connection of Seventh Avenue and Shore Parkway, which fell between Fort Hamilton and Dyker Beach Park, has been removed from the map: the lands associated with Fort Hamilton have been expanded and are marked a government reservation.

A Wonderful Map of Brooklyn

The map is expertly detailed, focusing primarily on all the mass transportation available at the time, showing existing and proposed streets and railroads, elevated lines, cable cars, trolleys and horse-trolley routes. The map shows and names piers, as well as ferry routes to Manhattan and New Jersey. The map was initially issued by the Brooklyn Daily Eagle, for inclusion in that newspaper's Almanac for the year 1900. (This strikes an ironic note, as The Eagle had opposed New York’s absorption of the City of Brooklyn in the 1894 vote.)

Though he is not credited on this map, it was drawn by Robert D. Servoss - a New York Lithographer whose work for Edsall and other map publishers appears across a span of over fifty years. OCLC lists six examples of this separate map in institutional collections, albeit insufficiently precisely for determining specific state changes and dating.

Robert D. Servoss (1854 - August 9, 1919) was a New York and Brooklyn based engraver active in the late 19th and early 20th centuries. Servoss was born in Connecticut. He worked for various printers in New York before establishing his own firm, Servoss Publishing, in 1897. Despite his appearance in print described as ‘the well known mapmaker,’(The Publishers' Weekly, November 10, 1906 p. 1306) his place in the bibliographical record is inscrutable. H There are several important patents in his name associated with the development of Wax Process printing - a major evolution in printing in the early 20th century that dramatically economized the process. He also published an interesting work The Building of a Book, in 1907, serving as a kind of encyclopedia of turn of the century printing techniques, compiled by the master printers who used them. In addition to his printing work, he appears to have been an avid cyclist, and a longtime member of the Long Island Wheelmen - a club of 'tourist bicyclists who do not race.' Servoss died in Brooklyn in 1919. Learn More...