1818 Berniere and Harrison Map of the Battle of Bunker Hill 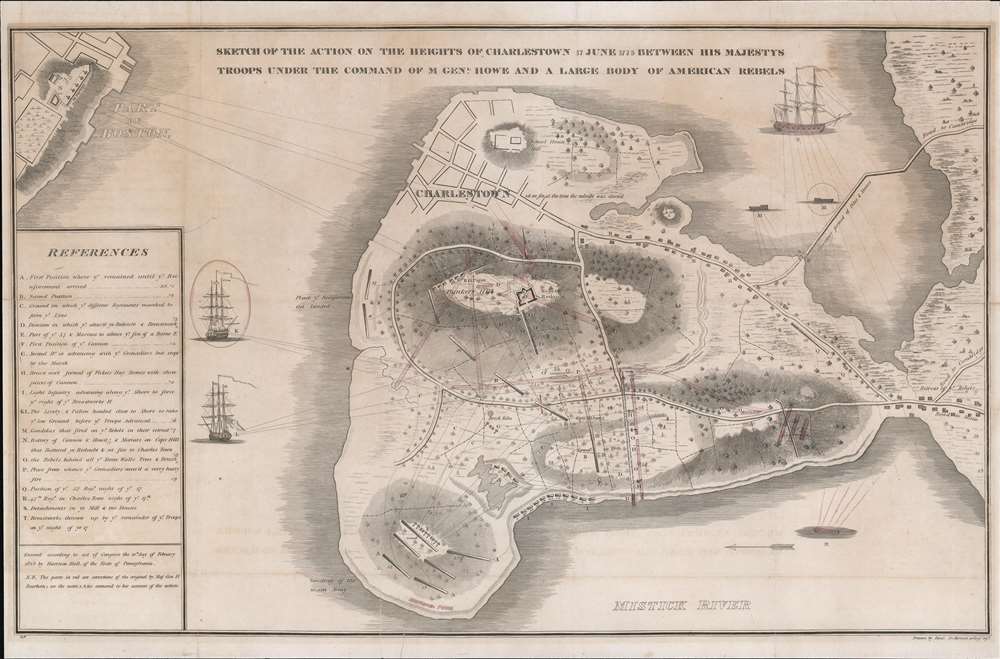 1818 Berniere and Harrison Map of the Battle of Bunker Hill

This is a rare 1818 map of the 1775 American Revolutionary War Battle of Bunker's Hill, Boston. Cartographically, the map is derived from a sketch by Henry De Berniere, a reconnaissance Ensign (spy) under British commanding General Thomas Gage. The original manuscript, from all reports, was discovered in a trunk in the early 19th century. De Berniere witnessed Bunkers Hill first-hand and prepared the map for his report to Gage. The map is distinctive for its exacting attention to detail and topography, including the layout of Charlestown, as well as its overall fine execution, illustrating all troop movements, underscoring's De Berniere's officer's education as a military engineer and draftsman. When the map was discovered in an old trunk, it was instantly recognized as the finest record of the battle available and became the model for most subsequent illustrations of the events.

Fought on June 17, 1775, the Battle of Bunker Hill was one of the first battles of the American Revolutionary War (1775 - 1783). When colonial troops discovered British plans to occupy the hills surrounding Boston, thus securing control of the Harbor, they preemptively established themselves on Bunkers Hill and Breeds Hill. Confident in their superiority, the British led two unsuccessful charges against the fortified position. Although the British finally succeeded in gaining control of the both hills and the peninsula, the victory came at a high price. British casualties were 1054 (226 killed), many of whom were officers, compared to Colonial casualties of just 450 (140 killed). The battle made clear that the war would be no easy victory for the British, while at the same time, bolstering the confidence of the comparatively inexperienced Colonial forces.

This map was produced for Port Folio magazine. First published in January 1801, the Port Folio was a Philadelphia-based American octavo magazine 'devoted to Useful Science, the Liberal Arts, Legitimate Criticism, and Polite Literature.' It was published as a weekly from 1801 through 1809, when it transitioned to a monthly. The magazine was acquired by Harrison Hall (1875 - 1866) in 1815. It was heavily illustrated with historical, scientific, and scenic imagery. After a 27-year run, The Port Folio finally folded in 1827.

This map was drawn by Henry De Berniere in 1775. It was lost for the subsequent 40 years until rediscovered and engraved by Harrison Hall and published in February 10, 1818 in Philadelphia for the March 1818 Port Folio (Philadelphia 1801 - 1827). De Berniere's original manuscript survives, with manuscript annotations by Maj. General Dearborn, in the collections of the American Philosophical Society. The 1818 edition here should not be confused with a smaller and more simplistic version of the map engraved later in the same year by 'Kneass, Young, and Company' for publication in The Analectic Magazine. There was later 1824 issued of the smaller 'Kneass, Young, and Company' edition by John Melish. The present 1818 Harrison Hall example is the first edition and quite rare on the market. We have identified only a single previous sale record and just 7 holdings institutional collections: The Morgan Library, the New York Public Library, Yale, the Boston Athenaeum, the Library of Congress, the University of Milwaukee, and the Clements Library. A rare opportunity for the Boston or Revolutionary War collector.

Harrison Hall (November 5, 1785 - March 9, 1866) was an American magazine publisher, engraver, bookseller, and surveyor active in Philadelphia and Maryland in the early 19th century. Hall was born in Maryland and lived in Philadelphia from at least 1818 to 1863. He was a non-graduate member of the University of Pennsylvania class of 1803, and by 1812 he was a partner in the Philadelphia firm of Capp and Hall. He was the publisher of The Port Folio, the first and oldest literary magazine in America, which he acquired in 1815. During his long career as a publisher he befriended many of the American luminaries of his day, including Thomas Jefferson. He moved to Cincinnati in 1865 where he died one year later, in 1866. His brother was the famous author, James Hall.