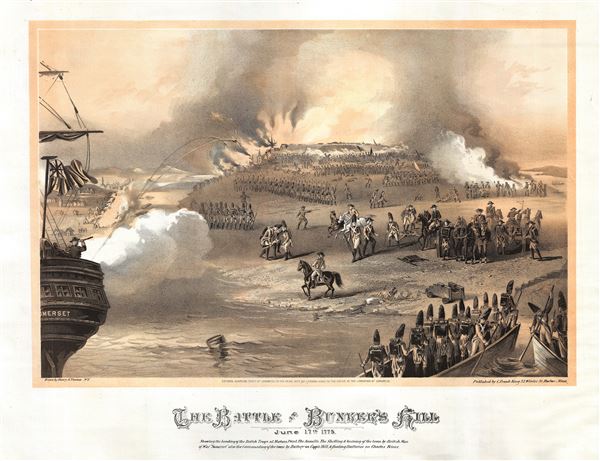 Scarce view of the Battle of Bunker Hill.

An uncommon 1875 lithograph view of the Battle of Bunker Hill drawn by Henry Atwell Thomas. The view illustrates the landing of British troops at Morton's Point and the subsequent shelling and burning of the town by the British Man-of-War Somerset, shown at the left. In the background we can see the cannonading of the town by a battery on Copp's Hill and from floating batteries on the Charles River. This view was published by C. Frank King of 32 Winter Street, Boston for the centennial celebration of the Battle of Bunker Hill.

This view is extremely scarce. The OCLC references only one copy at the Boston Athenaeum. We have further identified two additional copies in the holdings of the American Antiquarian Society; they include the present edition and a second edition, which may be later. We have also identified a copy in microfilm at the Library of Congress - it is unclear if they also preserved the original print.