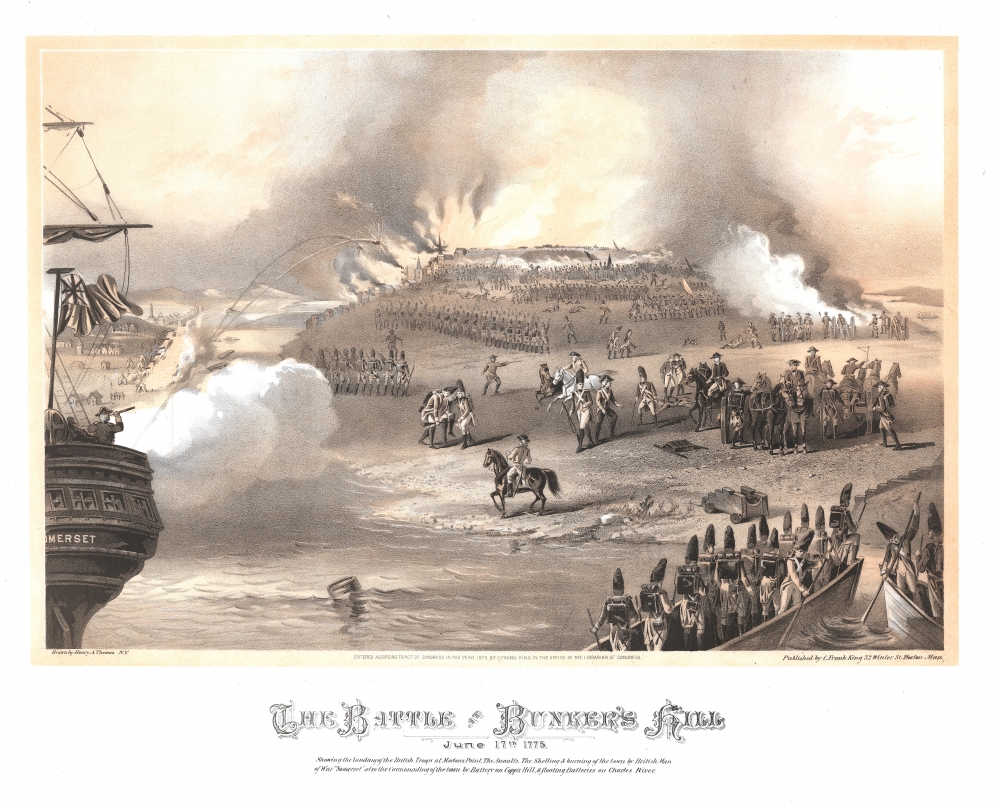 An rare 1875 Henry Atwell Thomas chromolithograph view of the Battle of Bunker Hill (1775). The view illustrates the landing of British troops at Morton's Point. Soldiers congregate on the beach before lining up in ranks to assault the Colonial forces fortified at altitude. The subsequent shelling and burning of the town by the British Man-of-War Somerset (which occupies the left border) is depicted. In the background, the cannonading of Charlestown by a battery on Copp's Hill and floating batteries on the Charles River is depicted.

Fought on June 17, 1775, the Battle of Bunker Hill was one of the first battles of the American Revolutionary War (1775 - 1783). When colonial troops discovered British plans to occupy the hills surrounding Boston, thus securing control of the Harbor, they preemptively established themselves on Bunkers Hill and Breeds Hill. Confident in their superiority, the British led two unsuccessful charges against the fortified position. Although the British finally succeeded in gaining control of both hills and the peninsula, the victory came at a high price. British casualties were 1,054 (226 killed), many of whom were officers, compared to Colonial casualties of just 450 (140 killed). The battle made clear that the war would be no easy victory for the British, while at the same time, bolstering the confidence of the comparatively inexperienced Colonial forces.

This view was published by C. Frank King of 32 Winter Street, Boston, for the centennial celebration of the Battle of Bunker Hill. This view is extremely scarce. A single example is cataloged in OCLC and it is part of the collection at the Boston Athenaeum. We have further identified two additional examples in the holdings of the American Antiquarian Society; they include the present edition and a second edition, which may be later. We have also identified a copy in microfilm at the Library of Congress - it is unclear if they also preserved the original print.


Charles 'C' Frank King (1839 - March 17, 1887) was a lithographer, publisher, and print salesman active in Boston during the late 19th century. Per some sources, King was not a lithographer, but contracted with other companies, such as the firm operated by Charles Crosby. Other sources, including his obituary and U.S. Census records, identify him as a lithographer. Born in England, King arrived in the United States shortly before the American Civil War. He enlisted in the Union Army on July 15, 1862 in New York City and served with the 145th New York Regiment. He eventually became a lieutenant in one of the regiment's companies. He mustered out on April 7, 1863. After the war, King was active in Grand Army of the Republic (G.A.R.) circles, and even attended several of their annual encampments, including the 1886 event in San Francisco. He married Clara M. Cole on January 1, 1872. Learn More...