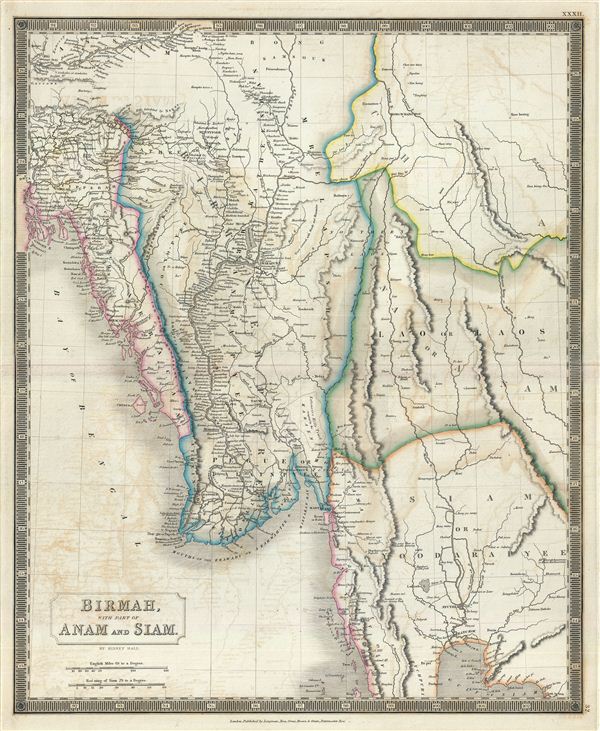 This is a beautiful map of Burma (Myanmar) from Sidney Hall's extremely scarce 1835 New General Atlas. It covers from Assam and the mouth of the Ganges River in Bangladesh to the Gulf of Siam (Gulf of Thailand) and includes part of the modern day countries of India, Bangladesh, Burma (Myanmar), Laos, China and Thailand. Countless towns and cities along the Erawadi (Irrawadi) River and its tributaries are marked. Several indigenous tribes are also named, including the Naga, Karaen, Koojangs and Loochaees. Ava (Inwa), the ancient imperial capital of several Burmese Kingdoms is here marked as 'Formerly the capital in Ruins.' The city was destroyed and abandoned in 1839 after a series of major earthquakes. Hall prepared this map as Burma was recovering from the First Anglo-Burmese War. The first of the three wars fought between the British and the Burmese Empire, the First Anglo-Burmese War, was the longest and most expensive war in the history of British India. Burma lost the war and its control over Assam, Manipur, Arakan and Tenasserim. Following the war, Burma was economically devastated for years due to payment of heavy reparations amounting to over 1 million British Pounds.