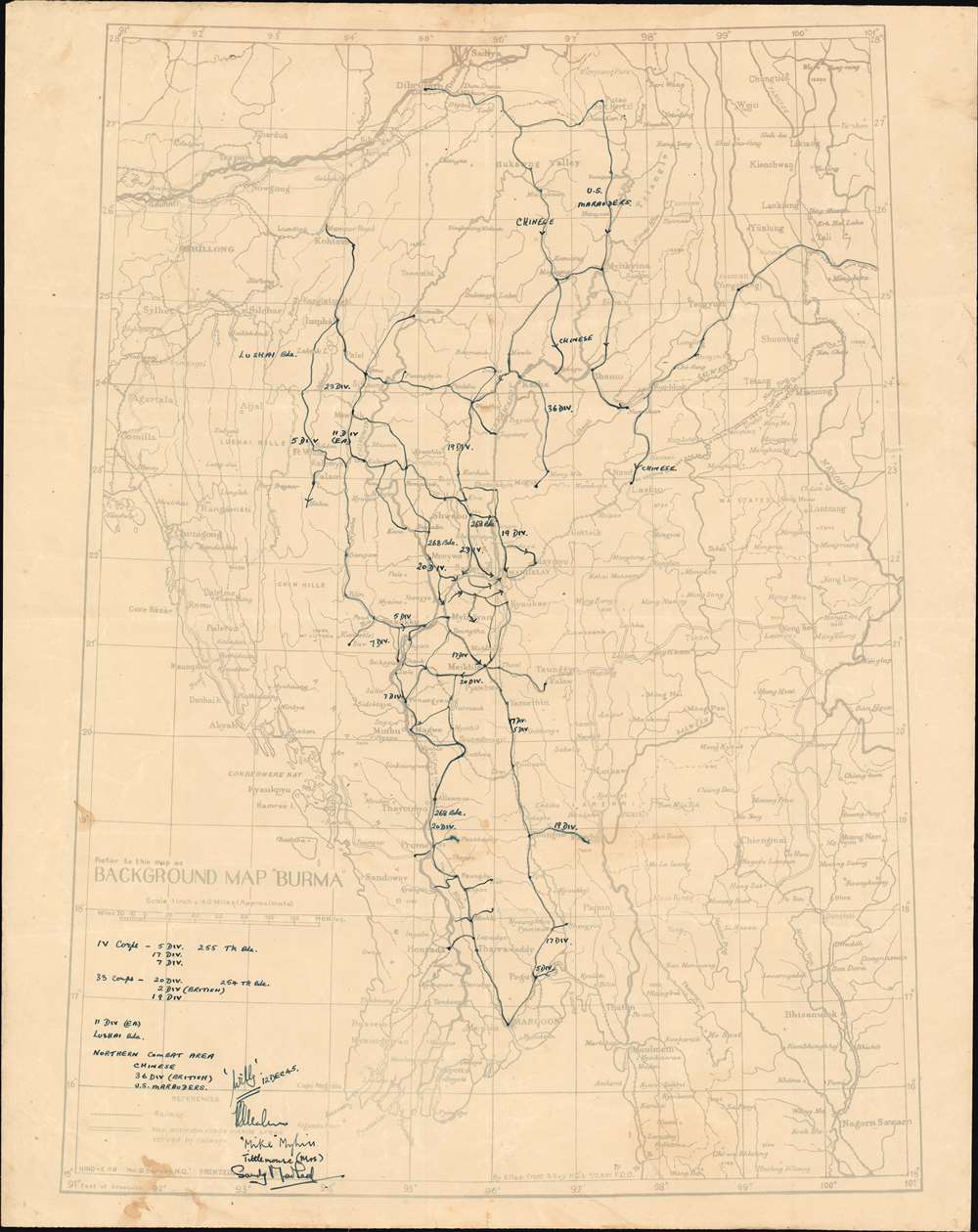 This manuscript campaign map is more detailed than any printed map of the Burma campaign we have located.
$2,500.00

This is a 1943 Survey department diazo / whiteprint map of Burma (modern-day Myanmar) during World War II featuring one-of-a-kind manuscript notations. These notations follow the advance of the 1944 – 1945 Allied campaign to recapture Burma from the Japanese and presents a more detailed look at this scarcely remembered campaign than any other contemporaneous printed map. Depicting the region from Shillong, India to the Mekong River, forming the border between Myanmar and Thailand, and from Sadiya to the Gulf of Martaban and the Indian Ocean, the map offers impressive detail throughout, covering transportation networks and hubs, specifically roads, railways, and river systems.

Manuscript overwriting in black follows the course of the World War II Burma Campaign in striking detail. Black lines illustrate the movements of various units. Some were part of the IV Corps or the 33rd Corps, which moved south toward Rangoon (Yangon) following the Japanese defeats at Imphal and Kohima in India. This mixed force of British, Commonwealth, and American units reached Rangoon after months of heavy fighting. In an effort to reopen the Burma Road, another army, consisting of Chinese regulars under American command, and the 5307th Composite Unit 'Merrill's Marauders', fought the Japanese south from Dibrugargh, India to Myitkyina and Bhamo. A key in the lower left quadrant details the units involved in the 1944 – 1945 Burma Campaign noting the corps to which the various divisions were attached. Four undoubtedly important but undecipherable signatures appear in the lower left.

The China Burma India Theater (CBI) was a second front for the Western Allies in the Pacific War. Burma, another British colony, was caught between British India and conquered Japanese territory to the east. The Americans also viewed India as a base of operations to resupply Chiang Kai-shek's Chinese nationalists in China. Kai-shek's fight against the Japanese bogged down hundreds of thousands of Japanese troops, making them unavailable to fight against the Americans elsewhere in the Pacific. In Spring 1942, the Japanese launched an offensive aimed at conquering Burma and closing overland supply routes to China. This campaign proved successful, and the Japanese pushed the Allies out of Burma and back into India.

The defeats of 1942, and subsequent losses in 1943, forced the Allies to reevaluate their plan going forward. In August 1943, a commando unit led by Major General Frank Merrill, 'Merrill's Marauders,' infiltrated Burma, where they utilized guerrilla tactics to harass the Japanese behind the lines. In February 1944, the Marauders attacked the Japanese 18th Division, allowing other elements of the American army under General Stilwell to gain a foothold in Burma. Following the Japanese defeats at Imphal and Kohima later in 1944, which stalled the Japanese invasion of India, the Allies began moving south in pursuit of the retreating Japanese. The Allies won victories at Meiktila and Mandalay before advancing on to Rangoon (Yangon), which was liberated in May.

This map was compiled by Survey Headquarters and printed in June 1943. The present diazo may date anywhere from the second half of 1943 to 1945, when the manuscript annotations were added. The manuscript notations date from late 1945, with one of the signatures dated as being from December 12, 1945. This is the only known example.

Very good. Diazotype or whiteprint. Light wear along original fold lines. Manuscript notations in pen. Blank on verso.
Looking for a high-resolution scan of this?