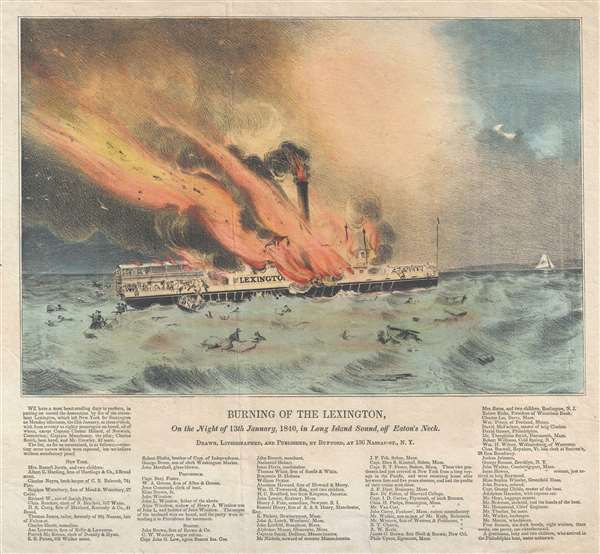 A rare view illustrating one of the most tragic steamboat disasters in American history.

This is a rare 1840 John Henry Bufford view of the tragic burning of the steamboat Lexington on the Long Island Sound, New York. The burning of the Lexington was one of the greatest steamboat disasters in American history and captured the popular interest in a number of important views – this being among the rarest. The view illustrates the accident, which took place on January 13, 1840, and claimed the lives of all but four of the 143 people on board. The names of the deceased are printed below the view and separated by the city where they lived: New York, Providence, Boston, and those passengers from various other places or who were not able to be properly identified or their hometown discovered.

The view illustrates the chaos that ensued following the outbreak of the fire, with numerous passengers illustrated in the water and the full-to-bursting lifeboats that would eventually sink due to the number of people that had crammed into them. The Lexington, along with its passengers, was carrying a cargo of bales of cotton, which were in the end her demise. The cotton had been stored inexplicably close to the smokestack, which caught fire halfway through the voyage to Stonington, and ignited the bales of cotton. The fire burned through the drive-rope, making the Lexington unnavigable, leaving her to drift out to sea. By midnight, those left on board were forced to jump into the frigid water and died of hypothermia. The Lexington sank by 3:00 a.m.

This view was drawn, lithographed, and published by John Henry Bufford in 1840.

Very good. Closed margin tears professionally repaired on verso. Verso repair to lower right corner not affecting the printed area. Blank on verso.
Looking for a high-resolution scan of this?