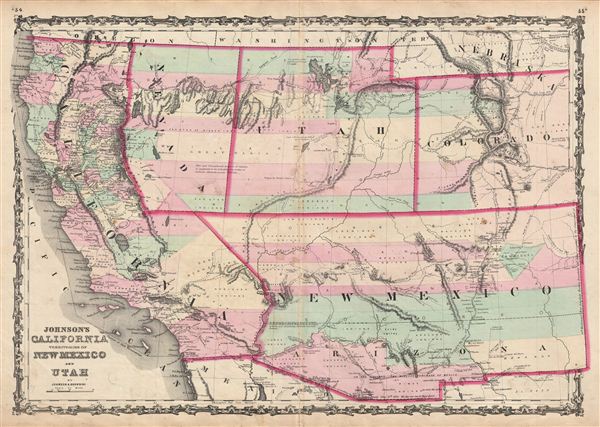 A fine example of the scarce 2nd edition of JohnsonÂ's map of the southwestern United States printed in 1861. The map covers from the 42nd parallel south to the Mexico border and from the Pacific to include most of Colorado. In the second edition of this map Johnson made significant changes, adding some territorial borders and eliminating others to accommodate the ephemeral political situation of the period.

This mapÂ's most significant change is the inclusion of Colorado territory, which was incorporated in February of 1861, just at this map was about to hit the presses. The Colorado Gold Region, which had been discovered only a few years previous in 1858, is clearly labeled as are all three Parks. Auraria (modern day Denver) is identified as the territorial capital.

Nevada too became a territory in 1861. The outbreak of the Civil War and the wealth of silver under Virginia City (here identified as Â‘Mormon SettlementÂ') hastened the conferment of territorial status on Nevada. The new borders of Nevada as set in the territorial charter forced Johnson to revise his 1860 map, moving the Utah-Nevada border three degrees west to longitude 116 and the California border westward to the Sierra Nevada range. This unusual choice infringed upon CaliforniaÂ's border charter inciting a border dispute between the two regions. The dispute was formally resolved in 1863 roughly according to the original California charter. This is the only example of JohnsonÂ's southwest map to show NevadaÂ's original territorial border configuration.

In New Mexico and Arizona Johnson has removed the latitudinal border between New Mexico and Arizona that he included in the 1860 edition of his atlas. This was most likely in response to ArizonaÂ's petition for territorial status independent of New Mexico being denied by the U.S. Congress. With only a small population and minimal political influence this region was largely ignored by the New Mexico territorial government in distant Santa Fe. Though Arizona applied several times to be granted independent territorial status, its low population caused the request to be repeatedly rejected. Curiously, in the same year this map as issued, the Confederate Col. John Robert Baylor would invade southern New Mexico and declare himself governor of the Confederate State of Arizona, which briefly reappears in the 1862 and 1863 Civil War editions of this map.

This map was published by A. J. Johnson and Ross Browning as plate nos. 54-55 in the 1861 edition of Johnson's New Illustrated (Steel Plate) Family Atlas.