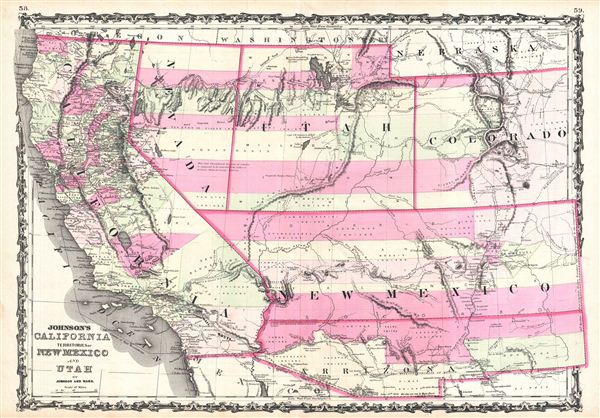 A rare mapping of the briefly extant Confederate State of Arizona.

One of the scarcest and most historically significant of A. J. Johnson's southwest series. Published in 1863 at the height of the American Civil War, this stunning map depicts the state of California and the territories of Nevada, Utah, Colorado, New Mexico and Arizona. Representing the third state of the Johnson southwest map, this map varies most significantly from its 1861 predecessor in the addition of a clearly defined Arrizona (yes, with 2 'r's) Territory.

In 1861 'Arrizona' was an alternate name for the lands added to the New Mexico territory by the 1854 Gadsden Purchase. With only a small population and minimal political influence this region was largely ignored by the New Mexico territorial government in distant Santa Fe. Arizona applied several times to be granted independent territorial status, but its low population caused the request to be repeatedly denied. At the outbreak of the Civil War, Arizonans recognized an opportunity to appeal to an alternate body for the political needs of the region and threw in their lot with the secessionist southern states. Around this time the Union began to withdraw troops from the region in fear that Santa Fe would be attacked by Confederate soldiers operating out of Texas. In Texas itself the Confederate Col. John Robert Baylor, recognizing a strategic opportunity, led his troops into Southern Arizona. In a series of brilliant tactical maneuvers, Baylor defeated the much large Union garrison and seized Fort Fillmore and Messilla. Shortly thereafter Baylor declared himself Territorial Governor of the Confederate Territory of Arizona including 'all that portion of New Mexico lying south of the thirty-fourth parallel of north latitude.' The Confederate Territory of Arizona lasted less than a year before it was seized by the Union Army and dismantled in favor of the current configuration with the Arizona – New Mexico border situated along a north-south axis. Some have suggested that the current border between Arizona and New Mexico was chosen for no other reason than that it differed from the Confederate border. However, it is far more likely that this border was influenced by the prospect of a Southern Pacific railroad route. If the Confederate boundaries had remained the railroad would have would have run only through Arizona, thus denying New Mexico the political and business opportunities that would have inevitably followed. A longitudinal border, however, allowed both territories to be enriched by the Southern Pacific Railroad. This is one of the few maps issued during this short and politically volatile period to specifically depict the Confederate Territory of Arizona.

This example also varies from the previous state of the map in that the California – Nevada border has been corrected to a straight line between Pyramid Peak (where several Mormon settlements are noted) and Fort Moliare.

elsewhere on the map, Utah and Arizona are split up along the 116th meridian, far west of where it sits today. Fillmore City is shows as the capital of Utah though Salt Lake City also appears. In Colorado the Gold Region near Colorado City is prominently depicted. Throughout, this map is full of interesting and sometimes erroneous notations regarding natural features, Native American tribes, proposed railroads, mail routes, explorer's tracks, and treaty lines. In the highly desertous region near modern day Quartzite, Arizona, a note reads 'in the vicinity of this place a tract of country is found which is said by Trappers to be exceedingly and fertile and abundantly timbered and well watered.' Johnson also notes silver deposits in this same region. 'Vegas' appears roughly in its current location though at the time there was little there but a natural water source and an abandoned Mormon fort. The famed Pony express Route is delineated as it passes through Nebraska, Utah, and Nevada on its way to California.

All in all, this is an extraordinarily example of one of the scarcest and most desirable 19th century American atlas maps of the southwestern part of the United States. Published by A. J. Johnson and Ward as plate numbers 58 and 59 in the 1863 edition of Johnson's New Illustrated Family Atlas.