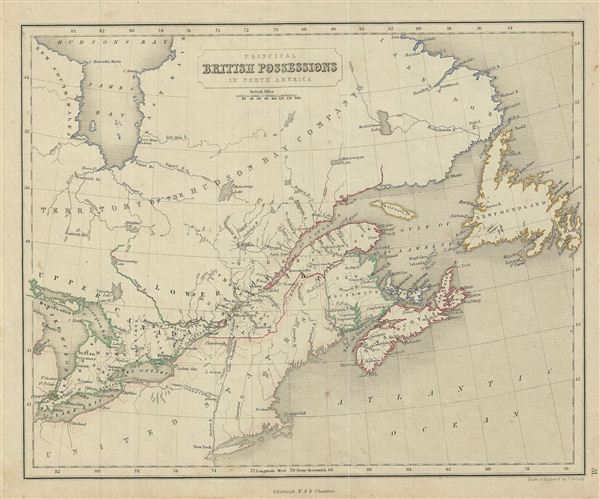 This is a fine example of the 1845 Chambers map of Canada or the British Possessions in North America. It covers Upper Canada, Lower Canada, Nova Scotia, New Brunswick and Newfoundland. Above this portion, the region is marked as 'Territory of the Hudson Bay Company.'

According to the earliest written accounts, the Russians were the first europeans who reached Alaska and eventually became permanent settlers. The modern Canadian provinces and territories were under British and French control from the 16th century, until France gave up its claims in the Treaty of Paris in 1763. Canada would remain a collection of British colonies until its confederation in 1867, when the British colonies of Ontario, Quebec, New Brunswick and Nova Scotia would become Canadian provinces.

Divided and color coded according to regions and territories, the map identifies various cities, towns, islands, lakes and an assortment of additional topographical details. Map was engraved by J. Gellatly.