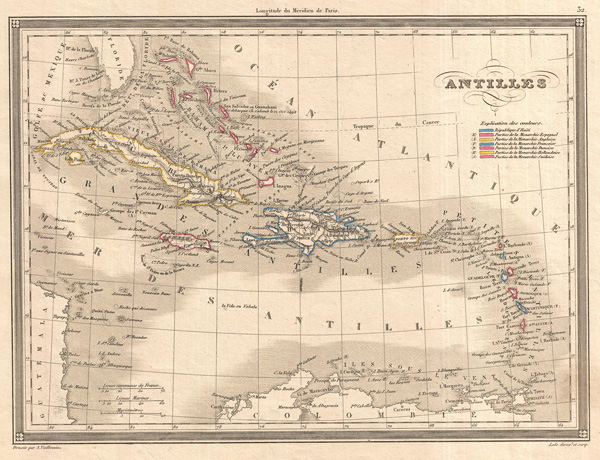 An attractive 1852 map of the Caribbean by A. Vuillemin. Details color coded colonial holdings, relief shown by hachures. Features a beautiful frame style border. Prepared by A. Vuillemin for publication as plate no. 32 in Maison Basset's 1852 edition of the Atlas Illustre.


The Maison Basset (fl. 1830 - 1860) was a French publishing concern active through the mid to late 19th century. From their offices at 33 Rue de Seine, Paris, France, Maison Basset published the works of such prominent French cartographers and engravers as Barbie du Bocage, A. Vuillemin, J. B. Charle, V. Levasseur, Tu. Duvotenay, H. Dufor, F. E. George, and others. Their library of publications is diverse and vast, but heavily focused on medical and scientific texts, including several important atlases. Learn More...