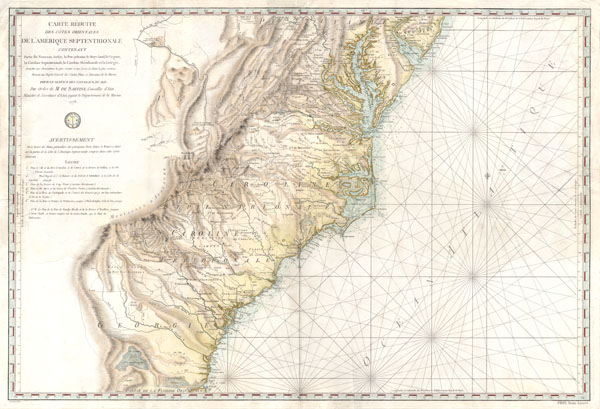 Nautical map by the French during the American Revolutionary War.

A rare and extraordinary map of considerable historic importance. This map, which covers from New Jersey and Pennsylvania southward through Maryland and Virginia, then along the Carolina coast to Georgia and Florida, was issued by the French 'Depot General de la Marine' in 1778. Although ostensibly a nautical chart, this map features a magnificent wealth of inland detail as far west as the Appellation Mountains and the Ohio River. Around the time this map was issued the French had been dragged into the American Revolutionary War. As a government-issue map, included in the extremely rare Neptune Americo-Septentrional, this map would have been carried by most French naval, merchant marine, and other military commanders. While the French contribution to the American Revolutionary War was primarily naval, the military nature of this map gives us some insight into the superb inland detail offered. We may safely surmise that such rich inland and topographic details would have been invaluable to any French forces that may have been grounded or forced to wage a land campaign. Details political and topographical features ranging from colonial borders to rivers and swamps, such as the Okefenokee in Georgia. Shows the American Indian holdings in western Georgia, the Carolinas and Virginia. The map also gives special attention to churches, missions and more specifically religious congregations, listing the Quakers, the 'Assemblent les Non-confirmistes,' and others. The 'Non-confirmistes' are a curious element of this map. Though to the Catholic French, this could have referred to Anglicans, Puritans, or any other Protestant group, the general location of the 'Assemblent,' in western North Carolina, suggests the possibly that they were Franklinites. The coastline is dotted with innumerable detailed depth soundings. The location of the Catawba Indians 'Catawbaw Town' is shown south of Charlotte. In Virginia, the town of York is noted on the York River, where we now recognize Yorktown. One can easily imagine that the French Admiral De Grasse consulting this map when, in 1781, his blockade of the York River forced the surrender of Cornwallis' British forces at Yorktown, effectively ending the American Revolutionary War.

This map was commissioned by Antoine de Sartine for inclusion in the Neptune Americo-Septentrional. It was engraved by Petit. Though his name does not appear on the map, the cartographic work behind this map is most likely the legacy of the late Ingenieur Hydrographe Jacques-Nicolas Bellin. Though dated 1778, this is mostly likely the second state of this rare map as is suggested by the removal of Petit's full title 'Graveur du Roi et de la Marine' in the lower left hand corner and the addition of a price, 'Pris Trois Livres' in the lower right.