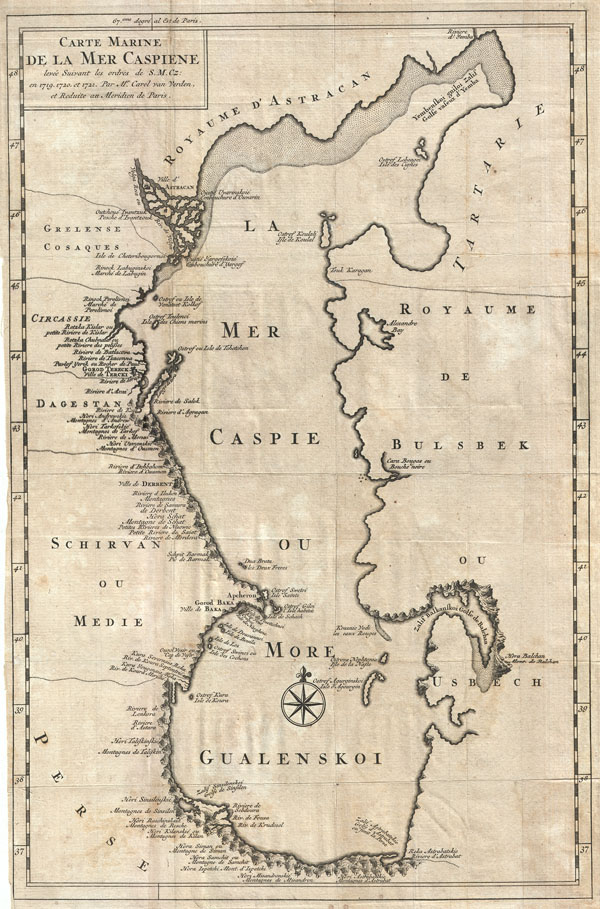 One of the first accurate maps of the Caspian Sea.

An uncommon variant on Carl Van Verden's important 1719 – 1721 mapping of the Caspian Sea. Around 1718 the Russian Tzar, Peter the Great, sponsored a number of cartographic expeditions to the farthest reaches of his vast empire. Most of these were headed up by Dutch navigators, the most experienced and mercenary of the era. Carl Van Verden, a Dutch seaman, was commissioned as a Russian naval officer and assigned the task of mapping the Caspian Sea. Though well known since antiquity the world's largest lake was largely ignored by surveyors until Van Verden's work in the early 18th century. Van Verden's work had significant political ramifications. Peter the Great, Russia's most expansionist Tzar, was determined to make the Caspian a 'Russian Lake' and invaded the region in 1722 seizing Derbent and Baku.

Copies of Van Verden's work eventually made their way to Paris via Nicholas de L'Isle, brother to the more famous cartographer G. de L'Isle. Geographers in Paris quick recognized the importance of the work and the era most significant cartographers and map publishers, including Homann, De L'Isle, Moll, and Covens and Mortier, were quick to copy and publish their own variants of the Van Verden chart. This example is one of the more obscure such charts. Published in Paris around 1730, this map offers a number of important elements. All text is in both French and transliterated Russian, so 'Bulsebek' becomes 'Usbech' and 'La Mer Caspie' becomes 'More Gualenskoi,' etc. Many of the mountains along the lake's western and southern shores are noted and curiously rendered with an unusual lake-centric orientation. Also noted are the Caspian's various reefs, shoals, sandbars, and other undersea dangers.

Carl Van Verden (fl. c. 1718 - 1730) was a Dutch seaman in the employ of the Russian Navy during the early 18th century. Van Verden is best known for his important 1719 - 1721 mapping of the Caspian Sea, which was the most sophisticated and accurate that had been issued to date. A significant cartographic achievement, Van Verden's work on the Caspian led directly to Peter the Great's 1722 invasion of Baku and Derbent and Russian hegemony in the region. Despite his achievements in the Caspian, Van Verden was later passed up by the Tzar in favor of Vitus Behring for the commission to discover a Northeast Passage through the Russian Arctic. Learn More...

Good condition. Even overall toning. Original fold lines visible. Some transference. Blank on verso.
Looking for a high-resolution scan of this?