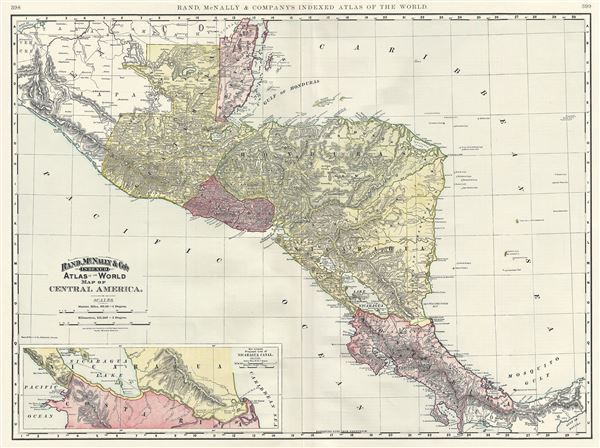 An attractive example of Rand McNally and Company's 1892 map of Central America. The map covers Central America from British Honduras to Costa Rica including Belize, Guatemala, El Salvador, Honduras, Nicaragua and Costa Rica. In Colombia, the boundary claimed by Coast Rica is noted. An inset map showing the proposed line of the Nicaragua Canal is included in the lower left quadrant. The proposed canal to this date remains to be built, having been superseded by the Panama Canal. Color coded according to countries, the map notes several towns, cities, rivers, mountains and other topographical details with relief shown by hachure. This map was issued as plate nos. 398 and 399 in the 1893 issue of Rand McNally and Company's Indexed Atlas of the World- possibly the finest atlas Rand McNally ever issued.