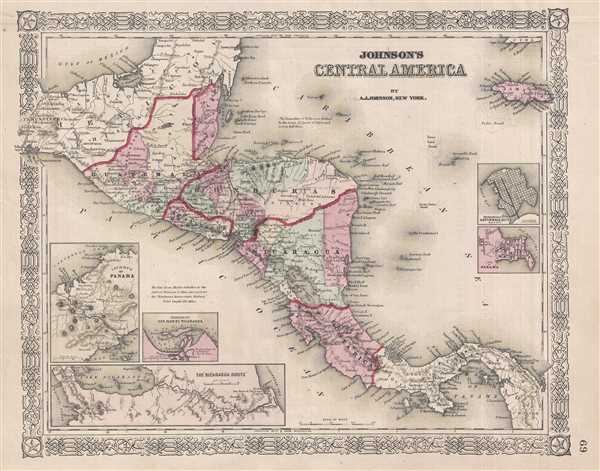 This is an 1866 A. J. Johnson map of the Central America and Jamaica. The map depicts from the Yucatan Peninsula to Panama and from the Pacific Ocean to Jamaica. Like most of Johnson's North America maps, this map is largely derived from an earlier wall map of North America produced by Colton and D. Griffing Johnson. Mexico, Guatemala, Belize, Honduras, San Salvador, Nicaragua, Costa Rica, and New Granada (Panama) are illustrated and labeled. Those countries which are divided into provinces are shaded several different colors, allowing for easy differentiation between the provinces, while those that do not have provinces, such as Belize and Costa Rica, are shaded only one color. Numerous cities and towns are labeled, along with rivers, lakes, several mountains / volcanoes. Several inset maps are also present, including the Isthmus of Panama, the Harbor of San Juan de Nicaragua, the Nicaragua Route, Aspinwall City, and the City of Panama. The whole is surrounded by the fretwork style border identifiable with Johnson's atlas work from 1863 to 1869.

Published by A. J. Johnson as page number 69 in the 1866 edition of Johnson's New Illustrated Family Atlas.