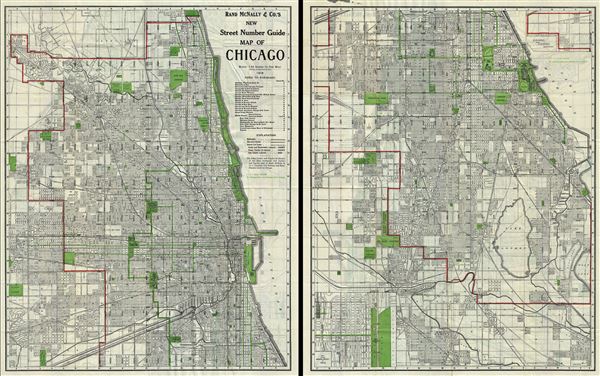 This is an uncommon 1916 pocket map or city plan of Chicago, Illinois by Rand McNally and Company. The Rand McNally Company issued this enormous pocket map to illustrate their home city in incredible detail. The map is printed on two sides of a single sheet of paper. The top side, shown above left, details northern Chicago from 47th street northwards. This section of Chicago includes central Chicago, 'The Loop,' Lincoln Park, the beginnings of the Chicago Park System, and the Magnificent Mile. The southern side of the map, above right, details Chicago south of 39th Street, including the southern tier of the Park System, Jackson Park (Field Museum), the Midway, Lake Calumet, and Wolf Lake. Inset maps of the 'Business District of Chicago' and the 'Clearing and Stickney Additions' are included in the bottom left and top right of this side respectively.

Selected as a railway hub for most of the American Midwest, Chicago underwent a boom period and was the focus of the world's attention in 1893 during the Chicago World's Fair, or as it is better known, the Columbian exposition. The map identifies Jackson Park, the location of the fair. It also illustrates the Chicago Park System. The 'Park System,' designed by Olmsted prodigy William Le Baron Jenny in 1871, refers to a network of parks and garden boulevards intended to embrace the city in arms of foliage. Many of these parks and boulevards remain today.

This highly detailed map identified parks, piers, cemeteries, street addresses, railroads, team tracks and an assortment of other topographical features. Individual streets and buildings are identified. Issued as The Rand-McNally Vest Pocket Map of Chicago, by Rand McNally and Company in 1916.

Very good. Some wear and damage along original fold lines. Printed on both sides. Image above represents both sides of a single sheet of paper.
Looking for a high-resolution scan of this?