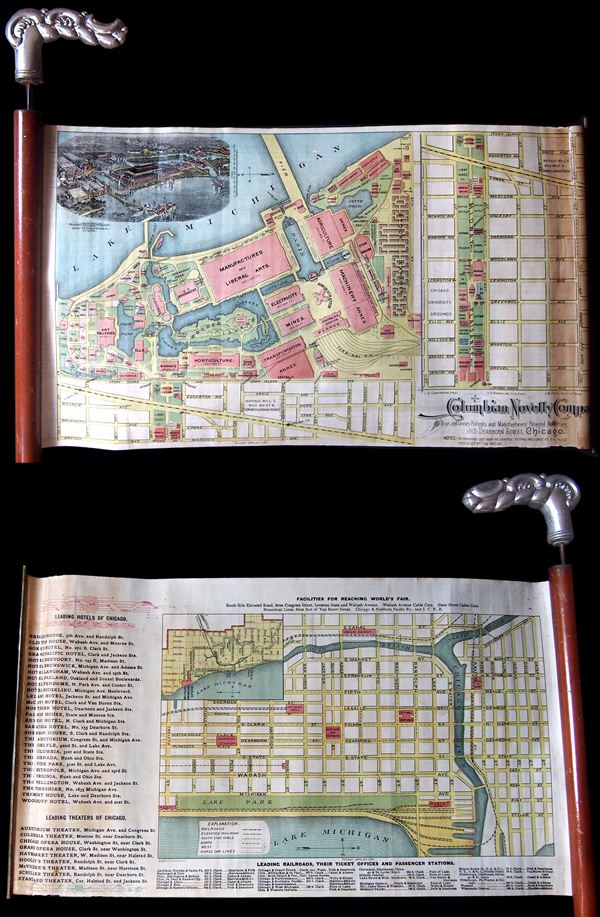 An extremely rare and unusual cane and map prepared in 1893 for the Chicago World's Fair or, as it is better known, the 1893 Columbian Exposition. This is the earliest known example of a cane map. The genre was invented by the Columbian Novelty Company and, as the map itself notes, the patent was still pending when issued for the fair in 1893. All subsequent cane maps, most of which date to the first half of the 20th century, follow on model of this cane as patented by the Columbian Novelty Company.

The map extends from an internal spring loaded roller mechanism in the top of the cane. It is printed and hand colored on both sides. The primary side shows the grounds of the Columbian Exposition, now Jackson Park and the Field Museum, naming all important buildings walks, pavilions, markets, etc. Among the specific sites noted are 'Buffalo Bill's Wild West Show and Congress of Rough Riders,' the Chicago University Grounds, and the various pavilions established for manufacturing, mining, transportation, liberal arts, agriculture, machinery, etc. In the upper left quadrant there is an aerial view of the entire fair. A larger inset along the right hand side of the map focuses on the Midway from Stony Island to Cottage Grove.

Good condition. The handle of the cane can be removed and the map extracted. The few examples of this cane map can we have come across are in poor condition, with numerous rips, tears, and other damages. This particular example stands well above the rest. The entire map is intact with some reinforcing tape at one end - see image. The map is attached to the brass pull at the opposite end. The map can be rolled into and pulled out of the cane with extreme care, but we do not recommend this – better to remove it from the cane entirely before examining it. We recommend mounting the map and cane as-is or removing the map from the cane for separate display. Measurement noted is for the map, the cane itself is about 30 inches in length.
Looking for a high-resolution scan of this?