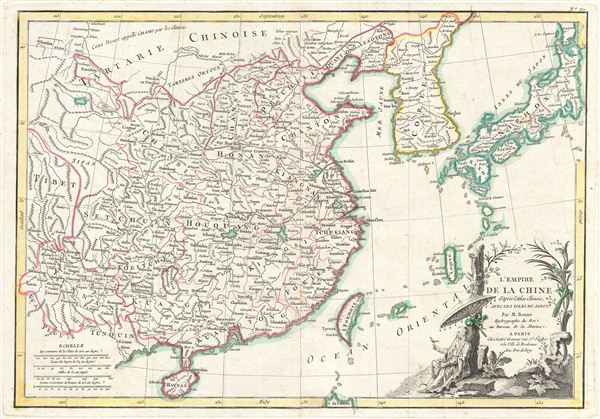 A fine example of Rigobert Bonne's c. 1783 map of China, Korea (Coree), Japan, and Taiwan (Formose). The map covers from the Gobi Desert southwards as far as Hainan and eastwards, to include Formosa, Korea, and Japan. Apparently based on a Chinese atlas, this map divides China into its various provinces, identifying countless cities throughout. Korea and Japan are not divided according to provinces, but numerous cities are noted. Formosa or Taiwan is divided along its central mountainous axis with areas in red on the west coast suggesting Chinese influences while the green tinted east coast hints at Japanese influence. Kesho (Tonquin's capital) and Hean (modern day Hanoi) are identified in Tonquin (North Vietnam). A decorative cartouche in the lower right quadrant depicts a Chinaman smoking opium and admiring a bird perched in his index finger while relaxing under an umbrella amongst bucolic surroundings. Drawn by R. Bonne in 1783 for issue as plate no. 27 in Jean Lattre's 1783 issue of the Atlas Moderne.