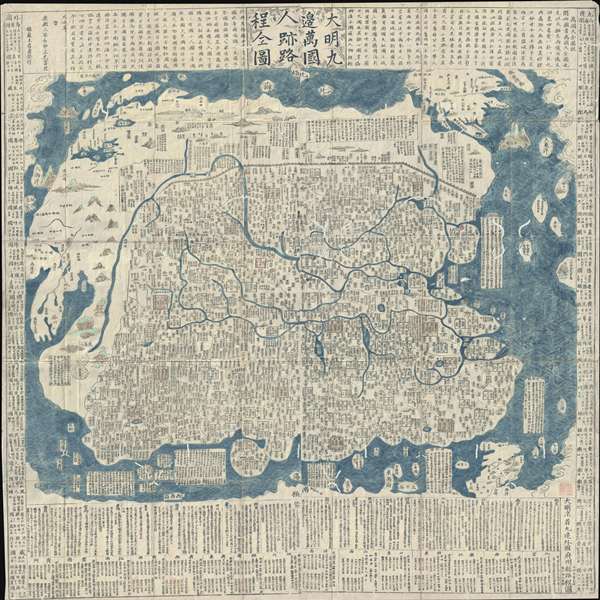 A rare and extraordinary 1663 (Kangxi 2) xylographic map of Ming China, and indeed the entire world, by Wáng Jūnfǔ (王君甫) issued during the reign of the Kangxi Emperor (1661 – 1722). This massively proportioned map focuses on China, which, bounded on the north by the Great Wall of China, on the west by the Yellow River, and on the east and south by oceans, occupies some three fourths of the map. As is characteristic of most Chinese world maps, the less detailed surrounding regions illustrate the rest of the world, but on a much reduced and often hard to interpret scale.

This world map's focus on China to the diminishment of all other lands is neatly summed up by the 17th century Chinese cartographer Chen Zushou,

All the barbarian people within the Four Seas should come to pay tribute to the Chinese emperor. Although they [the Jesuits] might describe the world as comprising Five Continents, yet four of them should surround the nucleus of China. (Smith, R., Mapping China and Managing the World, Culture, Cartography and Cosmology in Late Imperial Times, pages 84-88.)

Jūnfǔ's map is a hybrid incorporating western knowledge drawn from Jesuit sources as well as traditional Chinese cartography. The cartography of China itself is derived from earlier traditional sources. As the title suggests, this is a map attempts to illustrate the 'nine border towns' of the 'Great Ming' – a subject that would have been much on the mind of Ming supporters who, in 1662, just one year before this map was issued, were finally driven from southern China to exile in Japan and Taiwan. The map's secondary focus, as described by the title 'Human Presence and Travel Routes' refers to extensive text at the base of the map that describes Chinese provinces, travel routes between regions, and commerce.

Beyond China, the bordering kingdoms with which China would have had the most active commerce, Japan, Korea, the Ryukyu Kingdom, India, and Southeast Asia, are represented only textually, in large blocks situated in a manner loosely analogous to their physical proximity to China. The blocks feature notes on regional political structure, industry, and commerce in relation to China. Some small islands to the east of China bear interesting floral descriptions of the local inhabitants, such as the 'Land of the Hairy People,' a traditional Chinese reference to the Ainu of modern day Hokkaido. Also referenced is the 'Land of Women,', an archaic term that some speculate was used in Chinese legends to refer to the Aleuts (indigenous peole of the Aleutian Islands, Alaska), whose women were traditionally left to manage villages for long period while the menfolk hunted and fished for months on the ice packs.

In contrast, the cartographer does actually attempt to map foreign lands such as Europe, America, and Africa. Africa appears as a large peninsula at the extreme west of the map. While the general form and placement of Africa is vague, the Nile River, with a clear Ptolemaic dual lake model, is very much in evidence. Further north, a large body of water is recognizable as the Mediterranean Sea, with the Black Sea apparent and well formed just to the northeast. Europe is vague but the forms of Italy, Greece, Spain, France, and even Denmark are recognizable. Off the coast England (but not Ireland) is identified as Pueliya, an erroneous linguistic derivative of Aneliya orAnglia. Further north, the cartographer identifies the 'Land of Dwarves', a concept drawn from the 1602 Chinese-Jesuit Matteo Ricci map.

On the opposite side of the map, in the extreme northeast we can find a colorful mountainous island. This is Cuba. To the northwest there is another seeminly insular mass, that with some imagination, can be understood as North America. Florida, Mexico, Baja California, the Chesapeake Bay, Nova Scotia, and the St. Lawrence are all identifiable. At the bottom of the map, another island mass is South America, which is identified as the Land of Giants, another reference to Ricci, and in turn to Magellan's stories of giants in Patagonia.

Cartographically this map is based upon the 1644 map of Cao Junyi (Nanjing) – considered to be the last great map of Ming China. The two maps are visually similar with a few exceptions. The Wáng Jūnfǔ map does not have Cao's meridian lines and features additional decorative styling to symbolize clouds at the map edges. Otherwise the text at the top and the bottom, and the cartography itself, is strikingly similar. We find it curious and possibly significant that Cao's map of 1644 was issued within one year of the fall of the Ming Dynasty, and this map, by Wáng Jūnfǔ appeared within one year of the fall of the Southern Ming in 1662. Shortly after the fall of the Ming the Qing begin an active program of cultural suppression, including censuring all use of the term 'Great Ming.' Nonetheless, with nearby Nanjing being a stronghold of Ming power, it is not surprising that loyalist publications out of Suzhou, such as this map, remained in circulation.

The map features heavy textual annotation in classical Chinese. The text at the upper part of the map offers a brief overview of all the countries of the world, as well as the history of the map and offers references to Wáng Jūnfǔ's sources, including Cao Junyi. The right hand text identifies 29 militarized border crossings and defensive points. The left hand text briefly describes some 33 foreign peoples, some of which are fictional, but all of whom are considered 'barbarians.' The text below the map provides details of the two capitals of empire (Beijing, the northern capital and Nanking, the capital of the south) as well as the 13 provinces, involving population distribution, travel routes to and from, the tribute system, and the main commercial products of each: rice, wheat, silk, salt, cotton, etc.

Only three known examples of Wáng Jūnfǔ original map of 1663 survive. These are held in the collections of the Soongsil University, Seoul, South Korea, Harvard University, and the National Library of Taiwan. The presently offered c. 1680 Umemura Mihaku reissue of the 1663 Wáng Jūnfǔ map is itself exceedingly rare with only two other examples known, one in private hands, and another at the University of British Columbia. In comparing the two issues, it is apparent that the maps are identical, even to the 'Kangxi 2' date, suggesting that Umemura had access to the original plates – mostly likely brought to Japan by Ming exiles.

This rarity is a virtual stranger to the market and a once in a lifetime opportunity for the serious China collector.

Wáng Jūnfǔ (王君甫, fl. c. 1650 – 1680) was a Chinese printer and publisher active in the 17th century and based in Suzhou, China. His work suggest that he may have been a Ming loyalist. He produced only two known maps. Learn More...

Very good. Wormholing throughout as is common with Asian material of this period. Wormholes can be patched with matching paper at buyer's request.