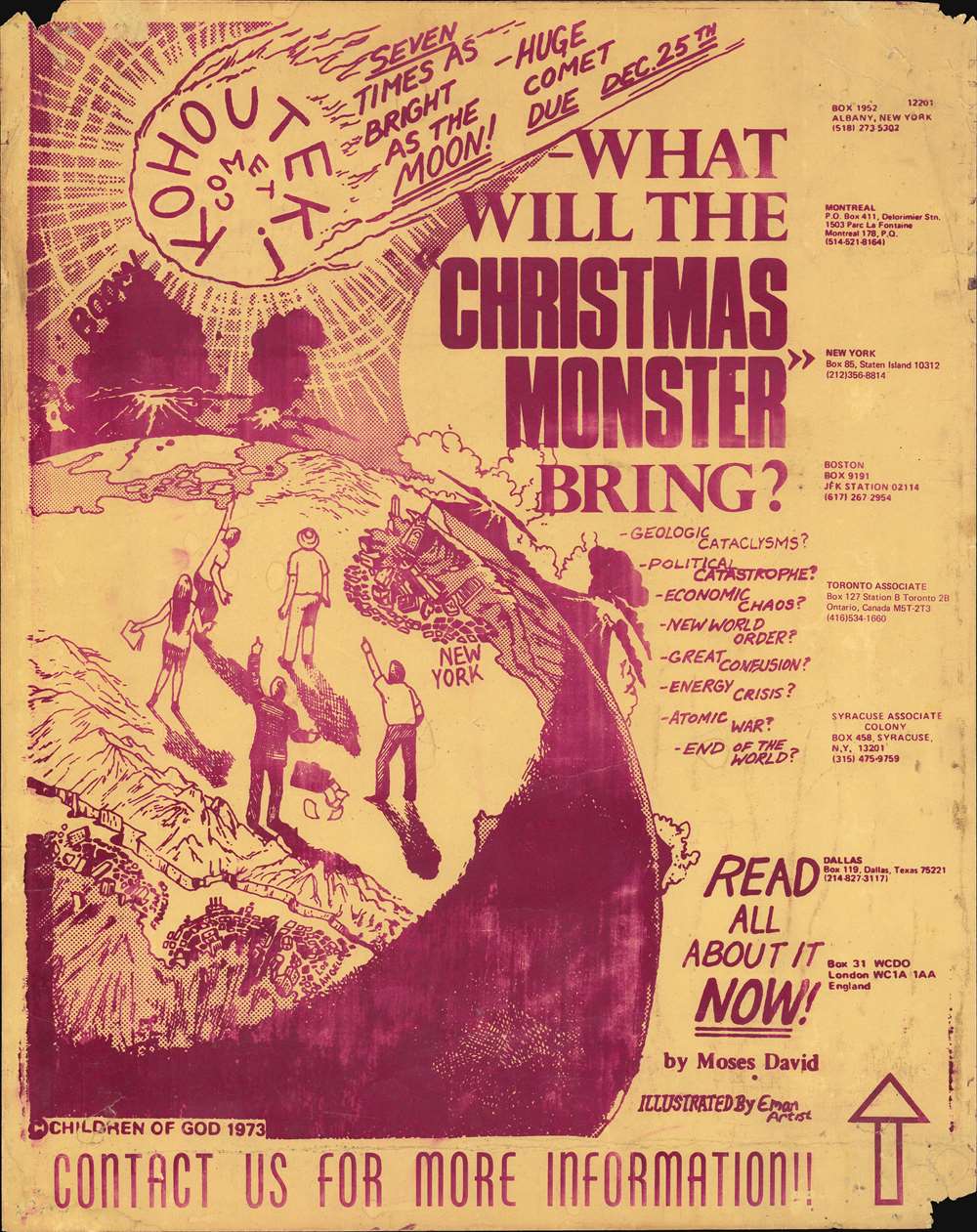 This is a remarkable doomsday broadside issued in 1973 by the Children of God sex cult in anticipation of the appearance of the comet Kohoutek (Kohouteki). The screen-printed broadside illustrates part of the globe encompassing North America - the comet's supposed strike point. New York, San Francisco, and Los Angeles appear in ruins while volcanoes erupt in the distance. The comet Kohoutek appears in the upper right, crashing to the earth, with text in its tail reading,

Seven Times as Bright as the Moon! Huge Comet Due Dec. 25th.

To the right of the image are addresses for various locations where more information or Moses David's manifesto could be acquired.

The Children of God Sex Cult

The Children of God were a sex cult founded in 1968 by David Brandt Berg (1919 - 1994), also known as Moses David. Although ostensibly a Christian fundamentalist religious movement, the organization embraced polyamory, extramarital sex, and free love, for which it is generally seen by outsiders as a sex cult. It also actively evangelized with 'Flirty Fishing,' using the lure of sex to 'show God's love and mercy.' Berg, or Moses David, communicated his doctrines through a series of letters known as 'Mo Letters.' One of these letters identified the arrival of the comet Kohoutek as the 40-day herald to the end of days. He cited Jonah 3:4, 'In forty days Nineveh will be demolished'. Berg believe that North America would suffer first, equating Nineveh with the United States. Members of the Children of God used the comet as recruiting tool, but also fled the United States en masse, establishing commune-colonies around the world.

The Comet C/1983 E1, commonly known as Kohoutek, was discovered on March 7, 1973 by the Czech astronomer Luboš Kohoutek. When it was initially discovered, it was believed that Kohoutek was an Oort Could object, and as such would be exceptionally bright and striking as it neared the Earth and outgassed. It was heralded by the media as the 'comet of the century' and embraced by cults and religious zealots as a sign of the 'end times.' Ultimately, Kohoutek turned out to be a rocky Kuiper-belt object, so no dramatic outgassing occurred. The 'comet of the century' turned into the 'disappointment of the century'. Following the failure of Moses David's prophecy, the Children of God fell into decline, but remains active today as 'The Family International.'

This map broadside is signed by Hugo Albert Westphal, Jr. (January 9, 1950 - present) (aka. Eman Artist. Snowy, Al Eastman), an American illustrator associated with Moses David and the Children of God sex cult. He produced the artwork for most of the cult's graphic imagery and propaganda. Westphal ranked highly in the cult, by some accounts, second only to founder Moses David himself. He was ultimately pushed out of the cult due to due to his violent temperament, but was reinstated in the early 1990s.

This broadside was designed by Eman Artist, properly Hugo Albert Westphal, Jr. This image appeared both as thus, and on the cover of a small pamphlet detailing Moses David's doomsday vision.

This is an exceedingly rare item and an ephemeral artifact from an oddball moment in American history. We have been able to identify no other examples of the broadside. However, an example the related pamphlet, also bearing a reduced version of this image on the cover, is held at the University of Virginia.

Good. Soiling. Damage to corners. Screen printed with identical image on both sides.
Looking for a high-resolution scan of this?