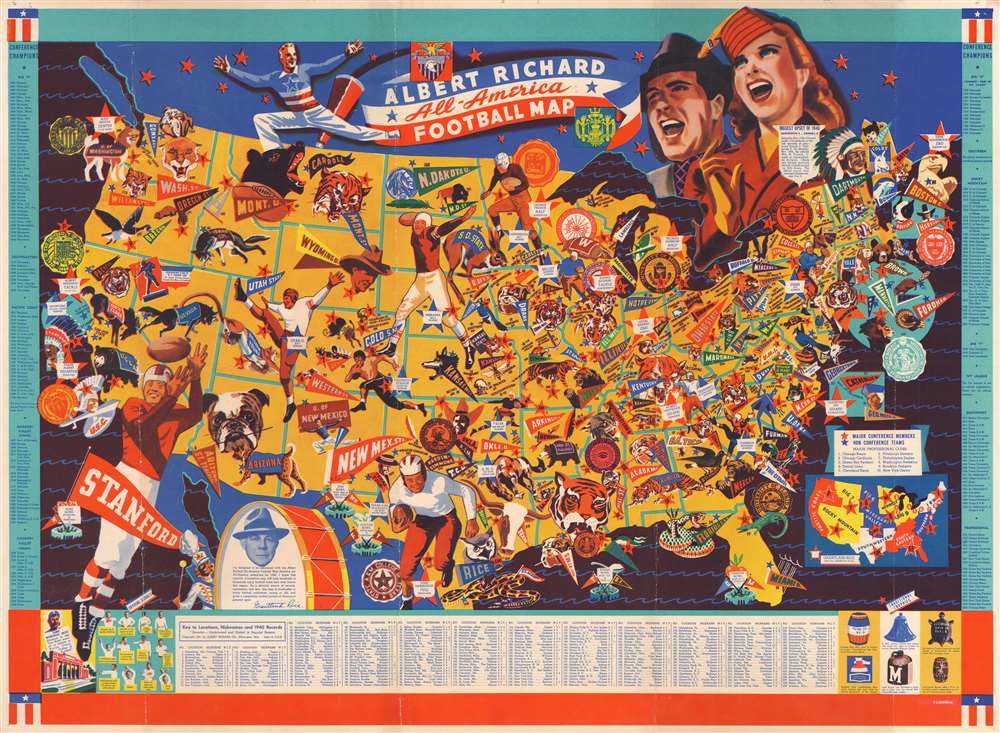 This is a 1941 Albert Richard pictorial map of the United States highlighting the many American's passion for college football. The map depicts the continental United States from the Pacific Ocean to the Atlantic Ocean and from Canada to Mexico with thick teal lines creating the borders between the states. The map's focus, however, is on the tradition and fanfare associated with college football, a uniquely American past time. 239 different schools are referenced in some manner and correspond with an index along the bottom border which provides the school's location by city and state, nickname, and win-loss-tie record for 1940. Some schools are marked only by their names, while others are highlighted by pennants, seals, or caricatures of their mascot. The latter include LSU, Kentucky, Auburn, Duke (with the Blue Devil pointing its pitchfork at UNC's pennant), Wisconsin, Wyoming, UCLA, Oregon State, Oregon, and the University of Washington. Conference winners are highlighted by large blue stars bearing the college or university's name and conference affiliation, while All-Americans are recognized with red stars bearing their name, position, and college or university. Bowl games are also included, marked by small stadiums and the score of the 1940 game. Conference winners dating back to 1896 are listed along both borders. Small infographics on either side of the index along the bottom border include illustrations of official signals on the left side and rivalry trophies on the right.

This map was created by F.E. Cheeseman and published by the Albert Richard Company in 1941. We are aware of only one institutional example, which is part of the David Rumsey Map Collection at Stanford University. It rarely appears on the private market.