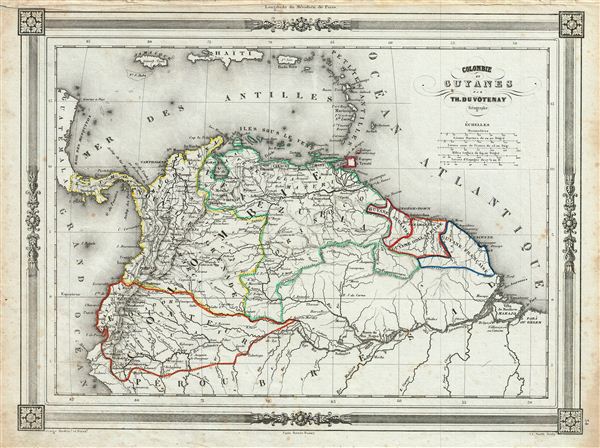 An uncommon and extremely attractive 1852 map of Colombia and Guyana. The map covers Gran Colombia (modern day Colombia, Venezuela, ecuador, Panama, northern Peru and northwest Brazil) and the British, Dutch and French Guyana from the Caribbean Sea in the north to Peru and Brazil in the south. Throughout, the map identifies various cities, towns, rivers and assortment of additional topographical details. Venezuela and ecuador, in 1829 and 1839 respectively, became independent states and Simon Bolivar's vision of Gran Columbia was proven untenable. However, a period of political upheaval and civil war would follow in the region. Venezuela dissolved in the bloody Federal War (1859-1863) in which a significant percentage of the population perished. Colombia was then under the Confederación Granadina, a short lived federal republic that consisted of modern day Colombia and Panama. The Confederación, facing strong opposition from both liberal and conservative elements, dissolved in 1863 in the midst of the Colombian Civil War (1860 – 1862). The map features a beautiful frame style border. Prepared by Th. Duvotenay for publication as plate no. 34 in Maison Basset's 1852 edition of Atlas Illustre Destine a l'enseignement de la Geographie elementaire.