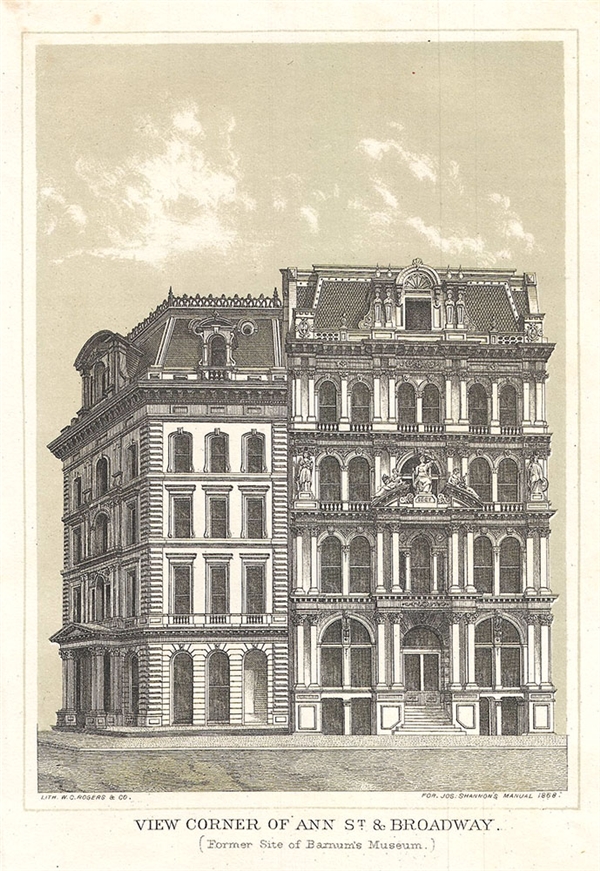 Nice view of the site of the former Barnum's American Museum in New York City.
$100.00

This is a nice 1868 view of the corner of Ann Street and Broadway in New York City, the former site of the Barnum Museum, by Shannon and Rogers. The view features the building that replaced P.T. Barnum’s American Museum, which burned to the ground in 1865. The Barnum’s American Museum opened in 1841 in lower Manhattan and was a significant part of urban culture. With a combination of entertaining, educational and almost ostentatious displays, from the Fejee Mermaid to General Tom Thumb, it was a combination of a zoo, museum, lecture hall, theater and freak show. The museum also promoted educational ends. In 1865, in what would be one of the most spectacular fires New York has ever witnessed, the American Museum burned to the ground. Witnesses saw animals jumping from the buildings and two whales were reported to have boiled alive in their tanks. P.T. Barnum eventually turned to the circus, for which he remains well known to this day.

New York Public Library, Art and Picture Collection, b17094222.
Looking for a high-resolution scan of this?