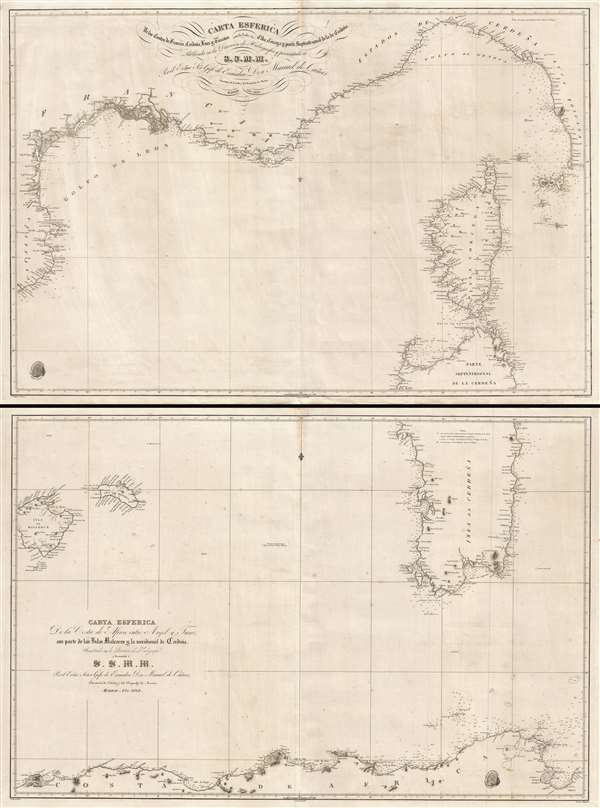 This is a rare 1838 two-part Spanish nautical chart of the western Mediterranean in the vicinity of Corsica, Sardinia, and the Balearic Islands. The map covers from Majorca (Mallorca) and Menorca (Minorca) east to Sardinia and Corsica and from the French Rivera to the north Africa coast. Both charts are beautifully engraved with superb coastal detail throughout.

It was issued by the Direccion de Hidrografia, a Spanish naval mapping organization, and first published din 1839. The OCLC recognizes a later updated edition prepared in 1897, but he present offering is the 1838 first edition. Both charts were drawn under the order of Don Manuel de Cañas. The upper chart was engraved by Clemente Noguera and the lower chart by Juan Carrafa. Both charts were drawn by José Espejo with letter engraving by C. Marquerie.


Clemente Noguera (fl. c. 1809 – 1860) was a Spanish draftsman, naval pilot, and engraver based in Madrid during the middle part of the 19th century. Little is known of Noguera, but he was active as an engraver as early as 1809, when he engraved a plan of Zaragoza, Spain. He was a second lieutenant of the Spanish Navy in 1830. By, 1850, Noguera was a senior draftsman for the Direccion de Hidrografia. Clemente Noguera should not be confused with Juan Noguera, who was also a senior line-engraver at the Direccion de Hidrografia. The two engravers may or may not be related. Clemente was significantly older than Juan, and may have been an older relative. Learn More...

Very good. Minor wear and toning on original fold lines. Even overall toning. Measurement provided reflects the combined charts, as in the image above.