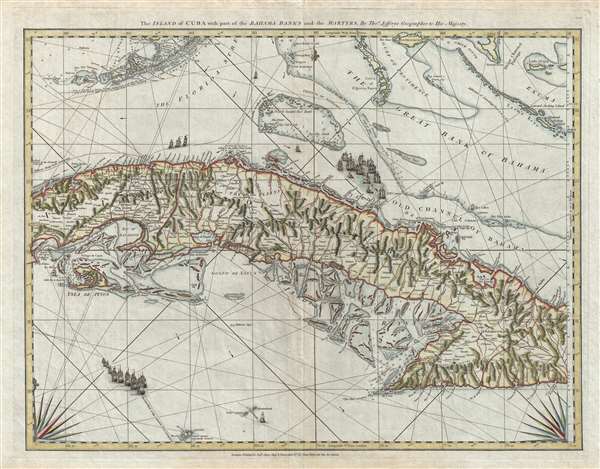 A rare and important 1775 Thomas Jeffreys and Robert Sayer sea chart or nautical map of Cuba, the Florida Keys, and the Grand Bahama Bank. The map's coverage extends from just west of Havana down to the Sierra Maestra, the Cayman Islands (in the lower left), most of the Florida Keys (in the upper left), and the southern part of the Bahamas, including Nassau (upper right). It includes while the vital shipping passage of the Strait of Florida in the upper left quadrant.

Most Authoritative Map of the Region During Piracy Resurgence

This was the finest nautical chart of this region to yet appear, and a particular improvement over Jeffreys's own early chart of the region, the 1762, Map of the isle of Cuba, with the Bahama Islands, Gulf of Florida, and Windward Passage. It remained the most authoritative map of the region throughout the American Revolution until well after the Napoleonic Wars (1803 – 1815). When this chart was most used, from 1775 – 1825 (or so), there was a dramatic resurgence of privateering and piracy in and around the Greater Antilles. During the Seven Years War (1756 - 1763) and the Napoleonic Wars, Spain, England, and the United States all issued Letters of Marque, allowing privateers flying under their nation's flag to seize ships and trade goods flying the flags of enemy nations. This created a huge industry, not only at sea, but on land where confiscated goods were traded. This system crashed to a halt at the end of the Napoleonic Wars when most nations stopped issuing Letters of Marque. Privateers became Pirates until finally brought under control by American naval forces in 1825. This excellent map would have been used by all parties, including pirates, navy ships, and merchantmen.

Mapping the British Takeover of Havana.

The general improvements are derived from the events of the Anglo-Spanish War (1762 - 1763), part of the Seven Years War, wherein England's West India fleet occupied Havana from 1762 to 1764. During the occupation period, the British not only had access to earlier Spanish maps and hydrographic surveys, but also produced their own high-quality surveys of Cuba and the surrounding waters.

An Important British Mapping of the Florida Keys

The cartographer's treatment of the Florida Keys is also significant. At the end the Seven Years War, Cuba was one of the last remaining and most valuable Spanish properties in America, although in 1763 under British occupation. The 1763 Treaty of Paris, which ended the Seven Years' War, ceded Spanish Florida to Britain is exchange for Britain relinquishing all claims to Cuba. This led to several new and excellent surveys of south Florida and the Florida Keys conducted from 1765 to 1771 by William Gerard de Brahm, the Surveyor General of British East Florida. The mapping of the nearby Bahama Banks is based on British naval surveys.

Spanish Treasure Fleet and Shipwreck of the Santiago El Grande

The map illustrates the course of Spanish Treasure Fleet and the fleet itself pictorially. The Treasure Fleet was a naval convoy system which transported wealth and good from Cartagena, Colombia, to Havana, Cuba, to Sevilla, Spain, and vice versa. The system is legendary for the wealth it transported as well as the famous shipwrecks and disasters that it suffered.

The site of one of these wrecks is here identified, near Orange Cay, Bimini, in the Bahamas due east of Miami, Florida. This can only be the Santiago El Grande, which was sunk by a hurricane in 1765, as stated on his map. Supposedly it was transporting one of the largest hauls of gold and silver to have ever wrecked and has ever since been the target of hungry treasure hunters. In 1994, a Canadian treasure hunter claimed to have discovered the wreck, but his 'discovery' was never verified and many claim it to have been be an investment scam. To this day the Santiago El Grande has yet to be definitively discovered and some scholars consider it a 'ghost wreck.'

This map was drawn and engraved by Thomas Jeffreys and published posthumously by Robert Sayer in 1775 as part of Jeffreys's American Atlas. Although this map is a standalone chart, it could, theoretically, be combined with other 16 maps from the American Atlas into a gigantic nautical wall map of the West Indies. We have never seen nor heard of it displayed thus. This map is very rare on the market.