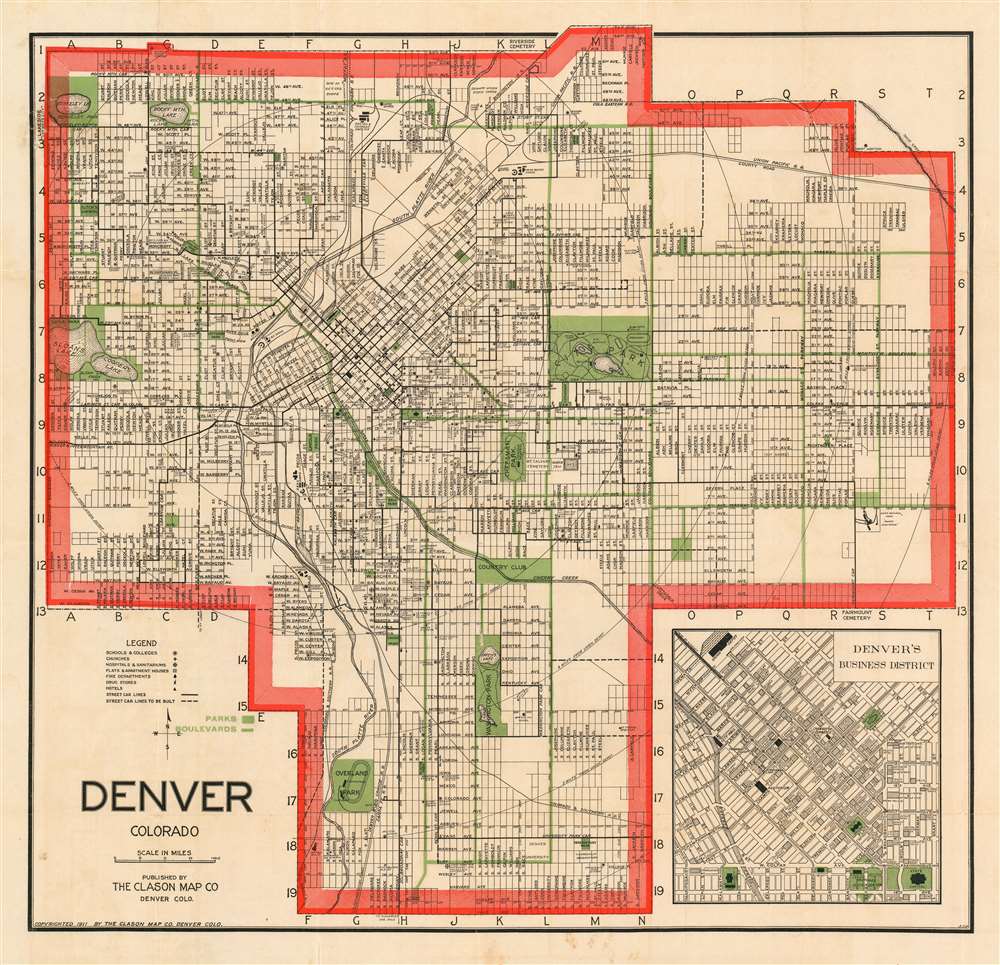 An attractive example of George Clason's 1907 guidebook and map of Denver, Colorado. This map covers the growing city from Berkley Lake to Yale Avenue and from Sloans Lake to Yosemite Street. Concentric circles mark each mile's distance from Union Depot. Though the map has not expanded yet to include Aurora (as it would be in later editions) the municipality is marked in manuscript along Colfax Avenue between Ulster and Wabash streets. An inset in the lower right quadrant details the Denver Business District.

The map, in conjunction with the included Clason's 1911 Guide to Denver, has been updated since its 1907 inception to emphasize the development of parks and other green spaces that were either not present, or not presented in the earlier edition. While the 1907 also highlighted Denver's dozens of parks, for the first time this 1911 issue marks out the city's boulevards in green on the general map. The map also shows the locations of important buildings - not only municipal structures and hospitals and fire stations and the like, but apartment buildings, hotels and even drug stores. The guide praises Denver as 'That Live Wire Town... a city of culture, refinement and education', discusses the city's history, and goes on to enumerate its specific features, ranging from its altitude (one mile above sea level!) its sidewalks (392 miles!) and touting the purest water in the world.

An odd alteration in Denver's northeastern border appears to have occurred between 1907 and 1911. An area, spanning between 43rd and 48th avenues and between Quebec Street and Yosemite Street here is shown outside Denver's city limits, where it was included on the 1907 map. The area contains no marked streets, and shows only a portion of Sand Creek and the location of the Ebert Addition School. Why this region should have been alienated from the city is not evident.

Clason’s guide maps appeared in multiple editions, and are found for the most part in 1920s issues. We have identified one 1907 issue of this map; this 1911 issue appears to be the second. We identify only five examples catalogued with OCLC in the Buffalo and Erie County Public Library, Southern Methodist University, the University of Wisconsin at Milwaukee, Denver Public Library, and History Colorado.

Good condition. Map has been flattened and backed with archival tissue, very minor loss at some folds. Original guidebook separate and present.