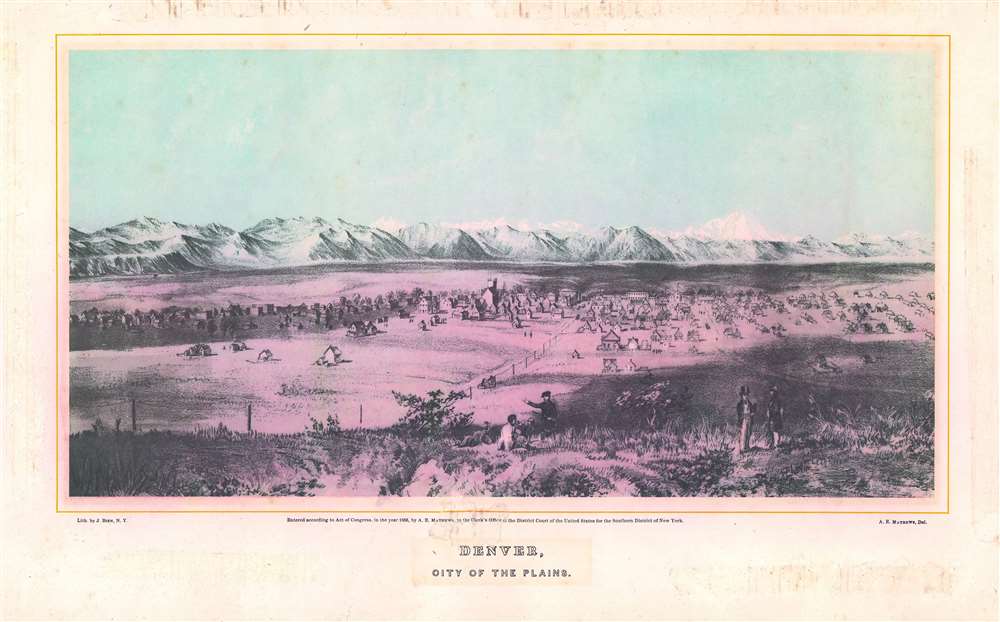 An important and rare 1866 bird's-eye view of Denver, Colorado by Alfred Edward Mathews. The view includes the entire then separate towns of Auraria and Denver as seen from a hill about one mile east of the South Platte River looking west towards modern day downtown. Although the South Platte itself is not obvious, we can recognize it from the narrow band of development on both sides of the river. The tall building at center is probably the Methodist Church constructed in 1864 at 14th Street and Lawrence. A road extends from the foreground into the center of the city and is consistent with modern day 15th or 16th Street. Shooting an arrow along this road into the background leads, some 60 miles distant, directly to Longs Peak. Pikes Peak may be on the far left, but we are not 100% confident in our identification. The bluff in the foreground from which the view was drawn, is most likely somewhere in the vicinity of the modern day capital building.

This view was issued to accompany Mathew's famous book, Pencil Sketches of Colorado. This work featured some of the most important and realistic early illustrations of Colorado life. The preset view is based on Mathew's own pencil sketch and was engraved and printed in 1866 by New York lithographer Julius Bien. A great rarity. The OCLC identifies only a single example of the individual view.

Alfred Edward Mathews (June 24, 1831 – October 30, 1874) was an English born American artist, author, and illustrator active in the middle part of the 19th century. Mathews was born in Bristol, England in 1831. His family emigrated to the United States and 1833 where they settled in Rochester, Ohio. There Mathews took work as a typesetter in his brother, Charles Mathews; newspaper, the Ohio Democrat. In the 1850s Alfred too new work as a traveling bookseller where he traveled throughout New England. Later in the 1850s he found work as a school teacher in Tuscaloosa County, Alabama. With the outbreak of the Civil War, Mathews returned to Ohio and enlisted in the Union Army, where he served with the 31st Ohio Volunteer Inventory. He participated in the Siege of Corinth and the Battles of Stones River, Lookout Mountain, and Mission Ridge. He proved an able draughtsman and produced topographical maps and views of important war events, including a panorama of Vicksburg. After the war Mathews headed west, settling briefly in Nebraska City before moving on to Denver, where his November 13, 1865 arrival was noted Rocky Mountain News. He began work immediately on a book of views and sketches highlighting the beauty and commercial prosperity of Colorado. The work proved both poplar and influential, earning him additional work in other Colorado cities, Montana, and California. Eventually he settled into a home on the Big Thompson River, west of Boulder. After only a few months there he contracted appendicitis and died on October 30, 1874. Learn More...

Good. Adhesive around outer margins professionally removed. There was also some adhesive between the title and the copyright notice, which has left minor damage. Some matte burn. Backed on archival tissue. In most institutional examples of this view still in the book, the foreground is yellow/brown and the background has a bluish tint. The present example has a pinkish cast in the foreground which may be a result of a printing quark or exposure to acid, sunlight, and extended early framing. Otherwise, a very nice example of a very rare view.