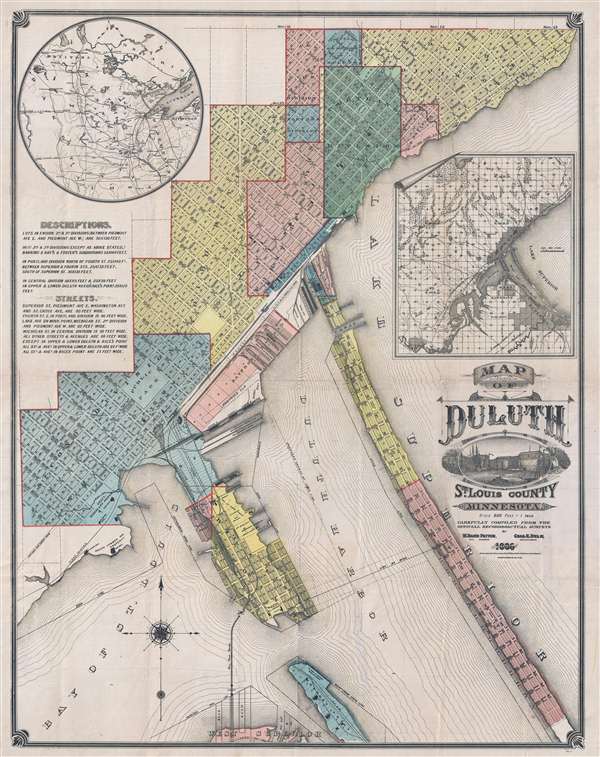 One of the earliest obtainable separate issue maps of Duluth, Minnesota.
$1,300.00

An exceptionally rare 1886 Map of Duluth, Minnesota by William Baird Paton and Charles H. Drew. This is one of the earliest obtainable separate issue maps of Duluth, Minnesota. The map covers roughly from Forest Hill Cemetery to Connors Point and includes Minnesota Point, Duluth Harbor, and the Bay of St. Louis. The map identifies land allotments as well as corporate properties and suggested land improvements. A large inset in the upper left details the greater region including parts of Michigan, Wisconsin and Iowa. Another inset to the right focuses on the immediate vicinity of Duluth. An elaborate decorative cartouche appears at right. Only three surviving examples known in institutional collections. The present offering is the only known example in private hands. Exceedingly rare.

William Baird Patton (October 14, 1860 – November 29, 1923) was an American surveyor and civil engineer active in Duluth, Minnesota, in the second half of the 19th and early 20th century. Patton was born in Germantown, Pennsylvania in 1860. He studied Civil Engineering at the University of Pennsylvania, graduating in 1880. After graduating he did small Civil Engineering jobs in Pennsylvania and Virginia before relocating to Duluth in July of 1881 to take work with the Duluth and Winnipeg Railroad. In 1883 he has established a name for himself in his new city and was hired as Duluth City Engineer, a position he held for many years. He was elected St. Louis County surveyor from 1889 -1895. In addition, he attended the Baptist Church of Duluth, where he also served as a Sunday School Superintendent. During his tenure as City Engineer, he surveyed and platted many of the city's allotments and worked on state border commissions. He died in Duluth in 1923.


Charles H. Drew (January 25, 1855 - ????) was a Duluth, Minnesota, based draughtsman with the City Engineer's Office. He also worked for the Duluth Department of Public Works. Little is known of his life.