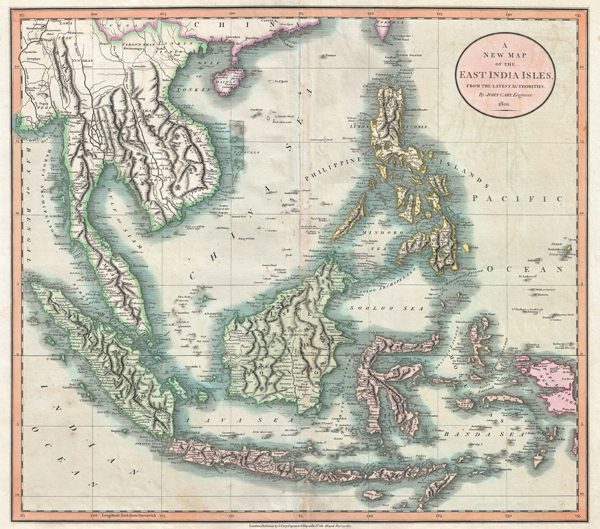 An exceptionally beautiful example of John Cary's important 1801 Map of the East Indies. Covers all of Southeast Asia and the Malay Peninsula, including Singapore, as well as the Philippines, Borneo, Sumatra, java, the Celebes, and parts of Papua New Guinea. One of the few maps of this region to label the volcanic island of Krakatoa between Java and Sumatra, which famously erupted, obliterating the entire island in 1883. Notes the Straits of Singapore at the southern tip of the Malay Peninsula. Offers wonderful detail regarding the mountain ranges of the region. Also shows some off shore details, especially the shoals near Borneo and the Philippines. In Southeast Asia this map notes the kingdoms of Siam (Thailand), Tonkin (North Vietnam), Cochin (South Vietnam), Cambodia, and Pegu (Burma). Includes part of the Island of Formosa. All in all, one of the most interesting and attractive atlas maps of the East Indies to appear in first years of the 19th century. Prepared in 1801 by John Cary for issue in his magnificent 1808 New Universal Atlas.