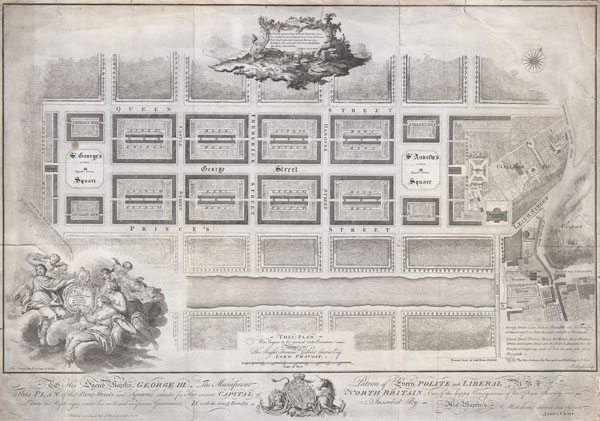 Drafted for the city planning committee in 1768 by James Craig, this is the definitive plan of Edinburgh, Scotland's New Town. Oriented to the North, this plan details the streets of Edinburgh north of the Loch Nor (today the Prince's Street Gardens) between St. George's Square (modern day Charlotte Square) and St. Andrews Square. A dedication to King George the III illustrates the lower part of the map. An elaborate title cartouche decorates the lower left hand quadrant. Thompson's poem appears in a secondary cartouche at the top center.

In 1766 the City Fathers of Edinburgh lead by Lord Provost George Drummond instituted a plan to extend the city's border to encompass the field's north of the Nor Loch. The plan, intended to modernize the city and ease the crowded conditions of the old Royal Burgh, was turned into a competition. James Craig, an Edinburgh native, having around this time just completed his apprenticeship as a mason, found the he had a fine hand for drafting. Inspired by his uncle James Thomson's well known poem Liberty,
August, around, what Public Works I see,
Lo' stately Streets, lo' Squares that Court the breeze,
See' long Canals, and deepened Rivers join
Eash part with each, and with the circling Main
The whole enlivened Isle…
Craig submitted this plan. Though conservative in its vision, Craig's plan won the city's design contest and he was awarded with the 'Freedom of the City' in 1767. Sadly the Lord Provost George Drummond who instituted the contest died before his dream of expanding the city was realized. It was left to his successor, the Lord Provost Gilbert Laurie, who is named on this map, to realize Craig's plan. Today the streets are laid out much as Craig envisioned them with broad east –west avenues separating housing blocks bisected by smaller mews.

Drawn by James Craig and engraved by P. Begbie in 1768. When this plan was printed in 1768, only 500 were issued. With such a small printing run as an independently issued map, we can safely assume that very few examples, other than the one you see here, have survived to this day. Only one recorded example of this map has appeared at auction in the last 30 years. Dated and copyrighted 'Published according to Act of Parliament, Jan. 1st, 1768.'

James Craig (October 31, 1739 - June 23, 1795) was a Scottish architect active in the mid 18th century. Craig was born in October of 1739 into an Edinburgh merchant family of little means. He was educated at the George Watson Hospital (where he was born) and School, an institution established to car for the sons of "deceased and indigent" merchants. As a young man he apprenticed to the mason Patrick Jamieson and in 1764 joined the St. Mary's Chapel Mason Guild. Though he is not known to have received significant architectural training, Craig turned out to be an excellent draftsman. His first substantial work, a layout of Edinburgh's first "New Town" north of Loch Nor, resulted from winning a contest issued by the city's Lord Provost George Drummond. The prize for winning the New Town competition consisted of a gold medal and the "Freedom of the City", an honor similar to the "Key to the City". Despite this considerable success early in his career, Craig would struggle throughout much of his life with joblessness and poverty. Nonetheless, he is known several other Edinburgh developments, including St. James Square, the demolished Physicians' Hall , and the City Observatory on Calton Hill. Craig prepared and submitted several other plans for the redesign and development of Endiburgh, including the 1788 Plan for Improving the City of Edinburgh, but most were never realized. The Fullerton Monument in St. Michael's Church yard, Inveresk and an obelisk honoring George Buchanan at Killearn, are also attributed to Craig. Craig died in Edinburgh in 1795. Learn More...

Good condition. This map has a vew minor repaired tears and light toning. This map has been bonded to a backing paper. We suggest that this backing paper be professionally removed and replaced with linen or lapanese paper. As a courtesy to any buyer, we will absorb the fee for this service with our restorers.