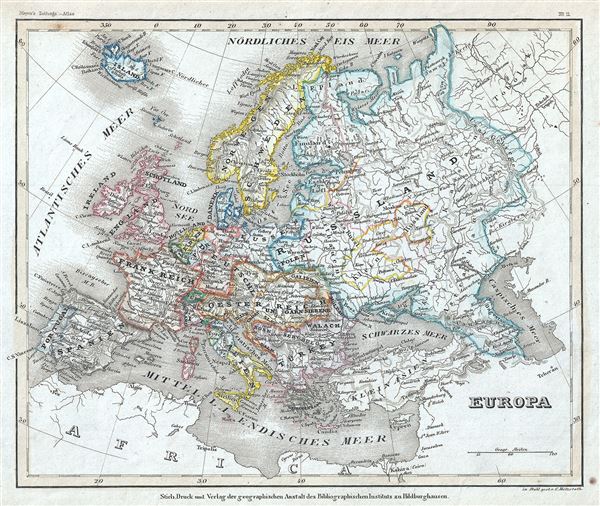 This is a fine example of the 1852 map of Europe by Joseph Meyer. It covers the continent in its entirety from the Atlantic to the Caspian Sea and from the Arctic Ocean to the Mediterranean Sea. It also details Iceland (Island) and parts of Turkey in Asia.

Meyer reveals the Austrian Empire at its height, the many states of the German Confederacy, and a pre-Garibaldi Italy split into numerous small Duchies and states. Meyer even notes the legendary and semi-mythical whirlpool known as the Loften Maelstrom (Malstrom) in northwestern Norway. This map was created during an exciting historical period that witnessed the unification of Italy and saw the British Empire rise to its peak.

This map was issued as plate no. 11 in Meyer's Zeitung Atlas. Although all the maps in this atlas are not individually dated, the title page and maps were often updated while the imprint with the date was not, causing confusion to the exact date for some of the maps. Moreover some maps in the atlas were taped in at a later date as an update to the atlas. We have dated the maps in this collection to the best of our ability.

Very good. Original platemark visible. Minor spotting at places, especially along margins. Blank on verso.
Looking for a high-resolution scan of this?