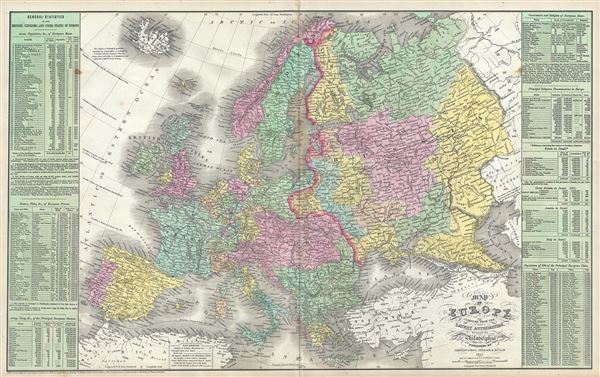 This is a scarce Thomas Cowperthwait and S. A. Mitchell's 1854 map of Europe. It covers the entirety of the continent, including Iceland and parts of Turkey, from the Arctic Ocean to the Mediterranean Sea and from the Atlantic Ocean eastward as far as the Caspian Sea. The whole is engraved and colored in Mitchell's distinctive style with green border work and vivid pastels. Political and topographical features are noted and color coded with elevation rendered by hachure. The left and right sides of the map proper features tables of general statistics.

Mitchell reveals the Austrian empire at its height, the many states of the German Confederacy, and a pre-Garibaldi Italy split into numerous small Duchies and states. This map was created during an exciting historical period that witnessed the unification of Italy and saw the British Empire rise to its peak.

Very good. Minor wear and toning along original centerfold. Some foxing at places. Verso repair along rips near centerfold and margins.