1872 Asher and Adams Map of Florida 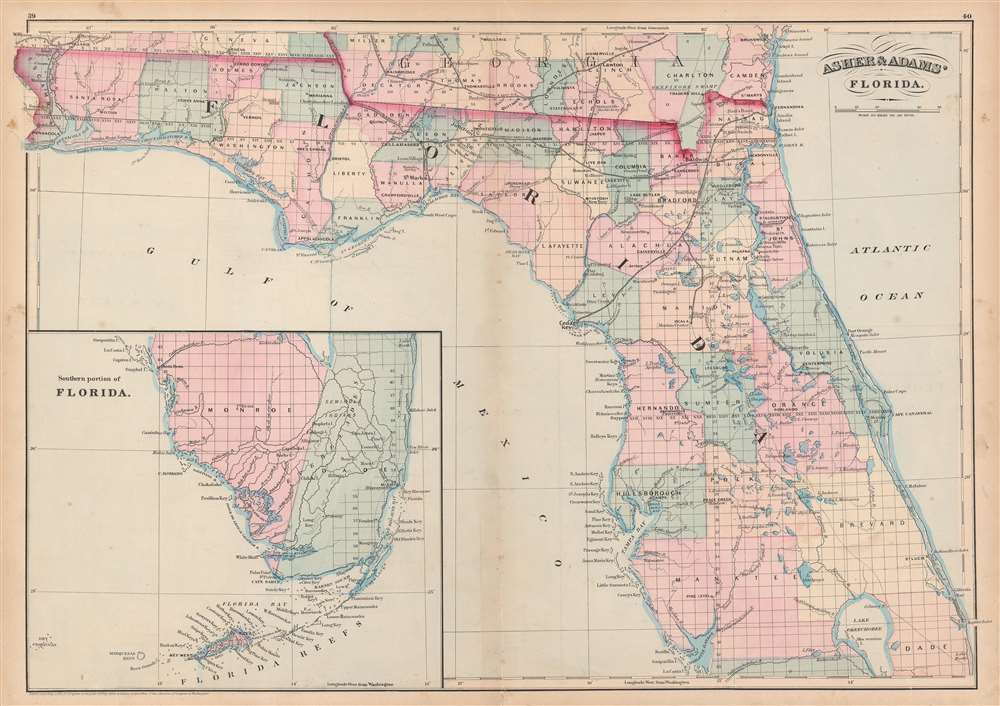 1872 Asher and Adams Map of Florida

This is an 1872 Asher and Adams map of Florida. The map depicts the state from the Perdido River to the Atlantic Ocean and from Georgia and Alabama to Lake Okeechobee and Charlotte Harbor. An inset map situated in the Gulf of Mexico illustrates southern Florida from the Caloosahatchee River to the Florida Keys and Key West. Highly detailed, cities and towns throughout the state are labeled, including Tallahassee, Apalachicola, Pensacola, Jacksonville, St. Augustine, Tampa, and Miami. Rivers and lakes are also identified, as are several railroads, such as the Jacksonville, Pensacola, and Mobile Railroad, the Florida Central Railroad, and the Atlantic, Gulf, and West India Transit Company. The relatively short St. John's Railroad, which links St. Augustine to St. Augustine Inlet, is included as well. The route for the proposed Gulf Coast and Florida Peninsula Canal runs from Apalachee Bay through the panhandle toward Sulphur Springs. The township grid is overlaid on the entire state, allowing anyone to know in exactly which township a certain municipality is located.

This map was created by Asher and Adams for publication in the 1872 edition of Asher and Adams' New Commercial, Topographical, and Statistical Atlas and Gazetteer of the United States.

Touchton Map Library M955.
Looking for a high-resolution scan of this?