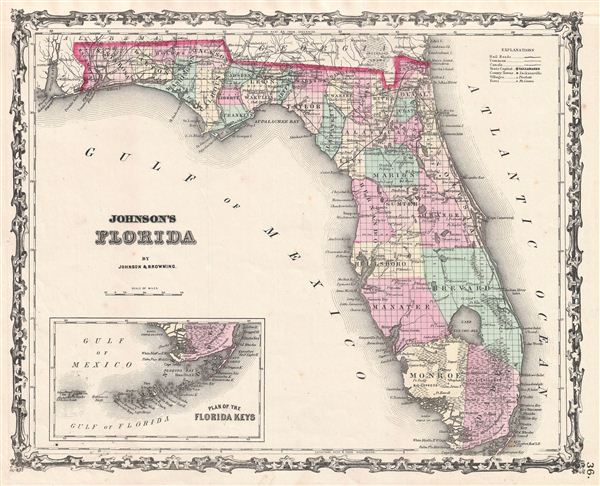 Florida on the cust of the American Civil War.

A beautiful example of A. J. Johnson and Ross C. Browning's 1861 map of Florida. This rare map offers a fascinating snapshot of this secessionist state on the cusp of the American Civil War. Map shows the FLorida in full with color coding according to county. Cartographically this map is probably based on U.S. Land Survey charts commissioned in the mid-1850s. Makes numerous references to American Indian tribes and to forts and battles sites related to the Seminole Wars. Notes Lake Okeechobee, the everglades, the Indian Hunting Grounds, Biscayne Bay, Tampa Bay and the Okefenokee Swamp. Also shows the course of a proposed canal route leading from Tampa to the Atlantic. The Arredondo Grant is included just to the west of St. Augustine. The Arredondo Grant was a layover of the Spanish Land Grant program, which bequeathed it to a powerful Spanish merchant - Arredondo. With incredible difficulty and protest, the land grants were dissolved when Florida became part of the United States. An inset map in the lower left hand quadrant details the Florida Keys. Features the strapwork style border common to Johnson's atlas work from 1860 to 1863. Published by A. J. Johnson and Browning as plate number 36 in the 1861 edition of Johnson's New Illustrated Family Atlas. This is the last edition of the Johnson atlas to bear the Johnson and Browning imprint, subsequent editions were issued under Johnson and Ward, or simply Johnson.