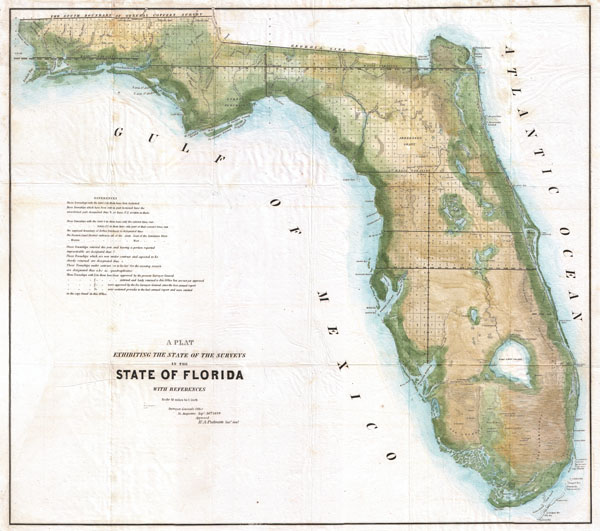 An extremely rare variant state of the 1849 Land Survey Map of Florida. Geographically this map corresponds to the 1848 Butler issue of this map, but bears the Putnam imprint and 1849 date overprinting an earlier date of October and Butler's imprint. Consequently this map was likely issued shortly after the transition from Butler to Putnam in the office of Surveyor General, yet before Putnam was able to create his own distinctive maps.

This map represents the state of the Land Survey in Florida as of September 30, 1849. Shows the state divided into several hundred numbered plats, some of which are marked with an 'S' to state that they had been fully surveyed, and some with a 'T' suggesting that they had only been surveyed externally. Labels several important Seminole War Forts including Fort Bassinger, Fort Center, Fort Thompson, Fort Beynaud, Fort Adams, and others. Notes the Everglades, Big Cypress, Fort Lauderdale, Lake Okeechobee, and many of Florida's lakes and river systems.

Also shows both the Arredondo Grant and Forbes Purchase. The Arredondo Grant is a layover of the Spanish Land Grant program, which bequeathed it to a powerful Spanish merchant - Arredondo. With incredible difficulty and protest, the land grants were dissolved when Florida became part of the United States. Forbes Purchase refers to a large tract of land in the Florida Panhandle that was purchased from Spain by three American traders in the late 18th century. After Florida became part of the United States there was an attempt by the government to seize this land, but it was shot down by the United States Supreme Court. Unfortunately, as Forbes Purchase was mostly uninhabitable swampland, it was impossible to develop and later sold off in lots.

The map is dated to 1849 and attributed to R. A. Putnam, Surveyor General. However, this map is very similar to Robert Butler's 1848 map and, in fact, there seems to be some over printing on the date and name. Upon close examination a date of 'Oct' seems to be printed under the more readable 'Sept,' and the name 'Robert Butler' under R. A. Putnam. Most likely this is a printer's mistake, a confusion between Rufus Putnam, who served as Surveyor General under George Washington, and, Major Benjamin Putnam served as Surveyor General of Florida from 1849 to 1851. Later states of this map correct the imprint to B.A. Putnam.