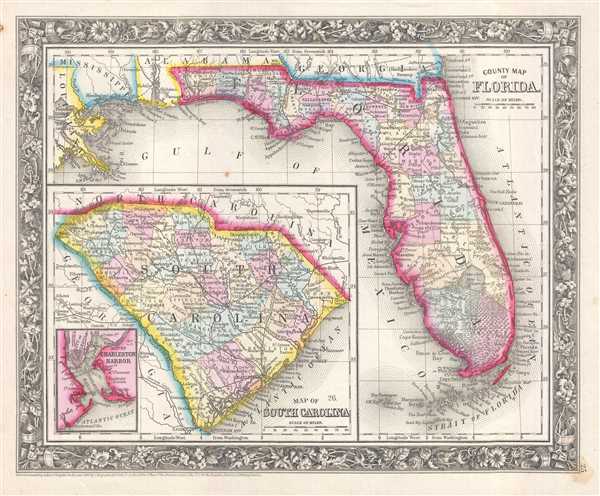 Includes an inset map of Charleston, South Carolina that labels Fort Sumter, where the first shots of the American Civil War were fired on April 12, 1861.

This is an 1861 Samuel Augustus Mitchell, Jr. map of Florida and South Carolina on one sheet. The map depicts the region surrounding the state of Florida from eastern Louisiana to the Atlantic Ocean and from Georgia and Alabama to the Strait of Florida. South Carolina, which is situated in the lower left quadrant, is illustrated from Georgia to the Atlantic Ocean and from North Carolina to Savannah, Georgia. Individual counties are illustrated, labeled, and shaded different colors to allow for easy differentiation in both Florida and South Carolina. Cities, towns, and villages are labeled in both states as well. Florida's nascent rail network is illustrated, with completed routes only in the northern part of the state, one of which connects Tallahassee with Jacksonville. A spur line between St. Marks and Tallahassee also appears to be in service, allowing cargo to be shipped from Appalachie Bay to Tallahassee.