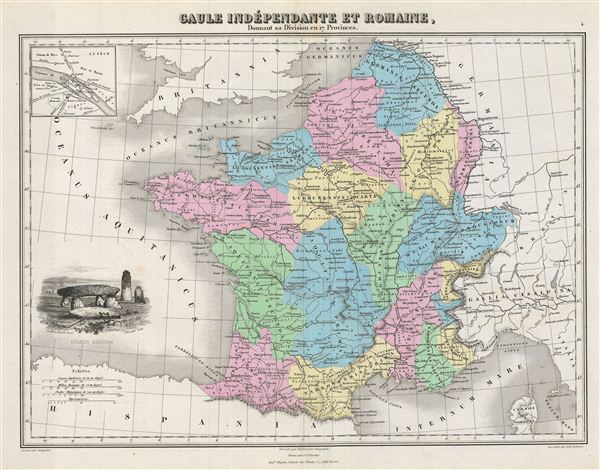 This is a fine example of J. Migeon's 1878 map of Gaul or France in ancient Roman times. The map covers from the southern part of england (Britannia) to the north of Spain and the Mediterranean. It details France under the Roman empire divided into 17 provinces. An inset on the upper left quadrant details Paris (Lutece). The map is decorated with a beautiful illustration of the Dolmen Menhirs.

Gaul was the ancient name of a region of Western europe which comprises of modern day France, Luxembourg, Belgium, most of Switzerland and Germany west of the Rhine. After the Gallic Wars of 58-51 BC, all of Gaul came under the control of the Romans. It continued under Roman control for almost 500 years before it fell to the Franks in AD 486. The Gallic Wars are believed to have been fought primarily to provide Caesar with wealth and popularity and to boost his political career rather than being a defensive action as described by Caesar. The campaigns are described by Caesar in his book Commentarii de Bello Gallico.

Migeon identifies various rivers, mountain passes, lakes and other topographical features. Migeon's Geographie Universelle, published in Paris, is one of the last great decorative atlases of the 19th century. It contains many stylistic elements of early 19th century cartography such as full hand coloring, numerous decorative vignettes, and high quality paper. This map was issued as plate no. 4 in Migeon's Geographie Universelle.